Cometabolism is best defined as “the transformation of a non-growth substance in the obligate presence of a growth substrate or another transformable substance”[2]. This definition describes co-oxidation and/or co-reduction of a substrate mediated by whole cells using existing non-specific enzymes, yet the cells are unable to obtain energy or nutrients from the transformation of the substrates to support microbial growth.

The cometabolic degradation phenomenon was first reported in 1958, observing that methane-utilizing bacterium Pseudomonas methanica (renamed as Methylomonas methanica) could oxidize ethane and propane, but was unable to use these compounds as a carbon and energy source[1]. Methane is a growth substrate for the methane-oxidizing bacterium, while ethane and propane are co-metabolic substrates. Subsequent studies have found that methanotrophs can cometabolically transform polycyclic aromatic hydrocarbons (PAHs), explosives, dioxane, polychlorinated biphenyls (PCBs), pesticides, and methyl tertiary-butyl ether (MTBE)[2]. In addition to methane-oxidizing bacteria, many other microorganisms, particularly oxygenase-expressing cultures, could cometabolically degrade persistent man-made compounds like chlorinated pesticides, halogenated aliphatic, and aromatic compounds[4][5]. 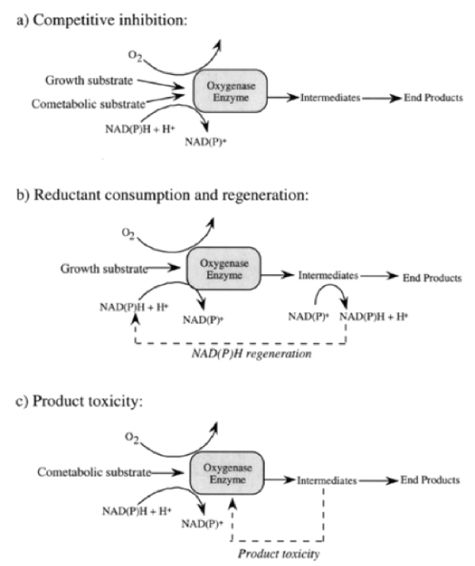 Numerous oxygenase enzymes, including but not limited to methane-, ammonia-, propane-, butane-, alkane-, and toluene-oxygenases, are known for their ability to degrade xenobiotic compounds cometabolically[4]. Among oxygenases reported, methane monooxygenase (MMO) expressed by methane-oxidizing bacteria (i.e., methanotrophs) is one of the well-studied oxygenses[5]. Methanotrophs can express two types of MMOs, particulate (pMMO) and soluble (sMMO). Compared to pMMO, sMMO has a broader substrate range and is known for its ability to degrade various environmental contaminants with some of the most persistent organics like pesticides, halogenated aliphatic and aromatic compounds[6].

During cometabolic degradation of trichloroethylene (TCE; a chlorinated solvent), methanotrophs use MMO to oxidize both methane (growth substrate) and TCE (co-metabolic substrate) with an expense of a reducing energy, reduced nicotinamide adenine dinucleotide (NADH), and oxygen. During methane oxidation, MMO will first convert methane to methanol, which is further oxidized to formaldehyde, formate and then carbon dioxide, resulting in a net production of reducing energy (NADH) and metabolites (formaldehyde and/or CO2) available for microbial cell growth.

As MMO is responsible for both methane and TCE oxidation, competitive inhibition of TCE degradation has been observed in the presence of methane (Fig. 1a). Different from methane oxidation, TCE is oxidized to TCE epoxide, which is quickly hydrolyzed to chlorine and carbon dioxide, resulting a net loss of reducing energy (Fig. 1b). Another unfavorable consequence is product toxicity- metabolites like TCE epoxide cause damage to cells and the degradative enzymes – limiting the amount of TCE can be biotransformed per cell (Fig. 1c)[7]. As such, if the cells contain a higher content of internal reducing energy power like polyhydroxybutyrate (PHB), a maximum transformation capacity of TCE per cell will be achieved[8]. In general, the kinetic and extent of cometabolic degradation varied depending on the types of cometabolic substrates, species involved in the degradation, the nature of the product toxicity, as well as the availability of the internal reducing energy pool of the degradative species. There are several kinetic models available describing cometabolism, from the prospect of competitive inhibition between growth substrate (primary substrate) and cometabolic substrate, consideration of cell growth versus product toxicity, and reducing energy consumption during cometabolic degradation[9].

Aerobic and anaerobic cometabolic bioremediation have been applied under different environmental conditions to remove contaminants including chlorinated solvents, MTBE, TNT, BTEX, and atrazine[10]. Methanotrophic-based, large-scale bioremediation for chlorinated solvents (like TCE) has successfully demonstrated[10]. There are several common classes of environmental pollutants that can undergo cometabolic degradation by various bacteria under aerobic and anaerobic conditions (Table 1). New studies also reported cometabolic degradation of emerging contaminants including MTBE[11], 1,2,3-trichlopropane (TCP), 1,4-dioxane[12][13], N-nitroso-dimethylamine (NDMA), and poly-fluoroalkyl substances like fluorotelomer alcohols[14][15][3], and some of this knowledge has been applied to remediation in the field in recent years. 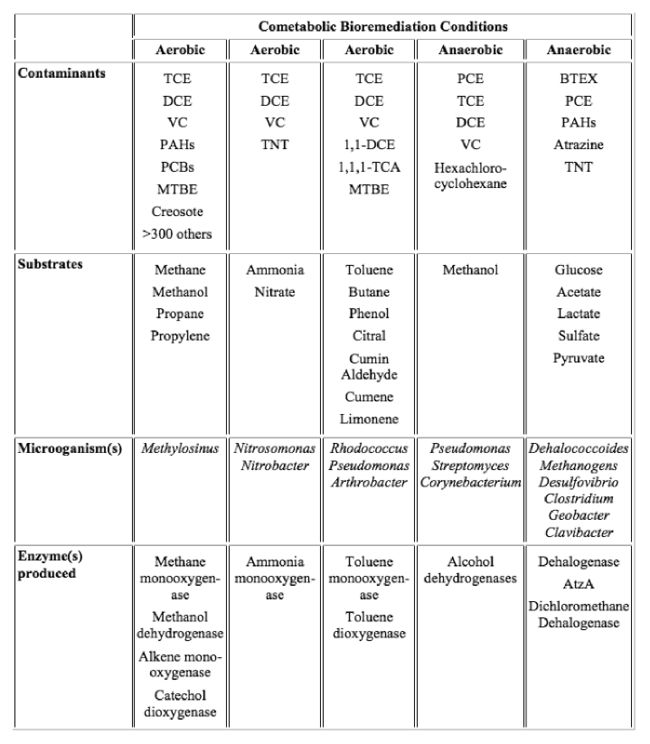 Cometabolic Degradation of Emerging Contaminants and Other Trace Organics