A Conceptual Site Model (CSM) is a collection of information about a contaminated site that integrates the available evidence regarding its hydrogeologic setting, contaminant sources, exposure pathways, potential receptors, and site history. A CSM for a Light Non-Aqueous Phase Liquid (LNAPL) site focuses on several key concepts: the stage in the LNAPL site life cycle, LNAPL distribution in the subsurface and the resulting mobility of the LNAPL, LNAPL as a source of dissolved and vapor plumes, and the attenuation of LNAPL sources over time. 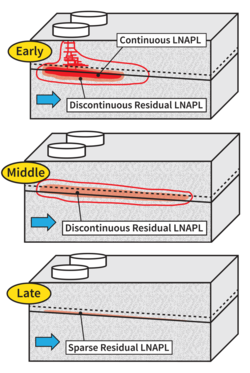 Figure 1. Early, Middle, and Late Stage LNAPL releases[2]. The key distinctions are the presence of continuous LNAPL that can be mobile and the amount of time that has elapsed for NSZD to remove LNAPL.

A Conceptual Site Model (CSM) is a collection of information about a contaminated site that integrates the available evidence regarding its hydrogeologic setting, contaminant sources, exposure pathways, potential receptors, and site history (see ASTM E1689-95(2014)[3] and ASTM E2531-06(2014)[4]). When developing a CSM for an LNAPL site, it is important to understand that LNAPL releases evolve and change from what are referred to as Early Stage sites to Middle Stage and then to Late Stage sites[2] (Figure 1).

An Early Stage site is characterized by the presence of a continuous LNAPL zone where a thick layer of LNAPL accumulation (also known as free product) is observed in monitoring wells. The continuous LNAPL zone (or LNAPL body) may be mobile at Early Stage sites, migrating into previously non-impacted areas. Removal of significant LNAPL mass by active pumping may be feasible at these sites. Early Stage sites are now relatively rare in the United States due to stringent environmental regulations enacted in the 1980s which emphasized preventing releases. 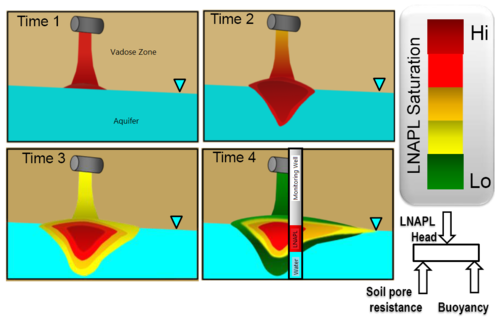 Figure 2a. Time lapse conceptualization of the formation of an LNAPL body[5]. 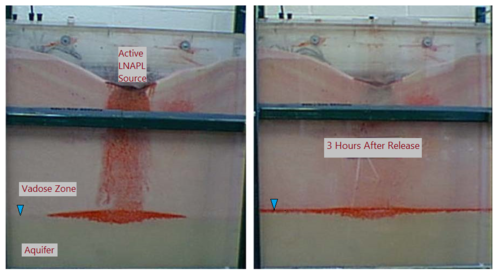 Figure 2b. Sand tank experiment of an LNAPL release[5].

Many sites in the U.S. are now considered to be in the Middle Stage, where the LNAPL thickness in wells has been largely depleted by natural spreading of the LNAPL body, Natural Source Zone Depletion (NSZD), smearing of the water table, and/or active remediation, and where the LNAPL bodies are stable or shrinking[1][2] (Figure 1). Active pumping characteristically only recovers LNAPL at relatively low rates of under 100 gallons per acre per year at Middle Stage sites, but NSZD rates may be much higher, on the order of 100s to 1,000s of gallons per acre per year. Middle Stage dissolved phase plumes, typically comprised of monoaromatics such as benzene, toluene, ethyl benzene, and xylenes, are stable or shrinking over time.

Late Stage sites only have a sparse distribution of residual (trapped) LNAPL due to long-term NSZD and any active remediation that has been performed at the site. The potential risks to receptors are typically low at Late Stage sites due to relatively low concentrations of LNAPL constituents in the dissolved phase and/or vapor plumes.

LNAPLs released from tanks, pits, pipelines, or other sources will percolate downwards under the influence of gravity through permeable pathways in the unsaturated zone (e.g., soil pore space, fractures, and macropores) depending on the volume and pressure head of the LNAPL release, until encountering an impermeable layer or the water table, causing the LNAPL body to spread laterally. The Interstate Technology and Regulatory Council (ITRC)[1] describes this downward movement toward the water table this way:

During the downward movement of LNAPL through the soil, the presence of confining layers, subsurface heterogeneities, or other preferential pathways may result in irregular and complex lateral spreading and/or perching of LNAPL before the water table is encountered. Once at the water table, the LNAPL will spread laterally in a radial fashion as well as penetrate vertically downward into the saturated zone, displacing water to some depth proportional to the driving force of the vertical LNAPL column (or LNAPL head). The vertical penetration of LNAPL into the saturated zone will continue to occur as long as the downward force produced by the LNAPL head or pressure from the LNAPL release exceeds the counteracting forces produced by the resistance of the soil matrix and the buoyancy resulting from the density difference between LNAPL and groundwater.[1]

While the release at the surface is still active, the LNAPL body can expand until the LNAPL addition rate is equal to the NSZD depletion rate. However, once the release at the surface is stopped, the expansion will stop relatively quickly, and the LNAPL body will stabilize. Figure 2a shows a conceptual depiction of this release scenario and Figure 2b shows a sand tank experiment of an LNAPL release. Because of the buoyancy effects, LNAPL releases that reach the water table will form LNAPL bodies that “like icebergs, are partially above and below the water table”.[2]

The nature of multi-phase flow processes in porous media (e.g., the interaction of LNAPL, water, and air in the pore spaces of an unconsolidated aquifer) has several important implications for environmental professionals in areas including interpretation of LNAPL thickness in monitoring wells and assessment of the long-term risk associated with LNAPL source zones. A few of the key implications are described below.

These three LNAPL states can cause different concerns and in some cases require different remediation goals.

LNAPL “Apparent Thickness” is a Poor Metric for Risk Management 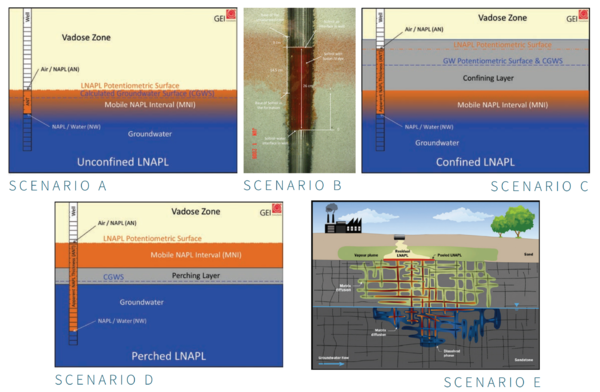 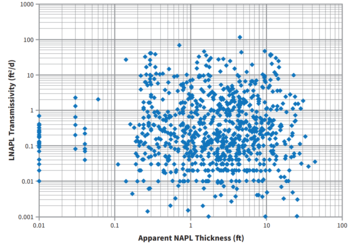 Overall, LNAPL thickness measurements are useful for delineating the extent of mobile LNAPL in the saturated zone and can provide useful data for understanding the vertical distribution of LNAPL in the formation[7][8]. But LNAPL thickness by itself is a very poor indicator of the feasibility of LNAPL recovery[9][6] (see NAPL Mobility) (Figure 4). Because there is little correlation between apparent LNAPL thickness and LNAPL mobility, there is also little correlation between apparent thickness and the risk to receptors from the LNAPL.

Experience of the last few decades has taught us: 1) our best efforts often leave some LNAPL in place, and 2) the remaining LNAPL often sustains exceedances of drinking water standards in release areas for extended periods. Entrapment of LNAPLs at residual saturations is a primary factor constraining our success. Other challenges include the low solubility of LNAPL, the complexity of the subsurface geologic environment, access limitations associated with surface structures, and concentration goals that are often three to five orders of magnitude less than typical initial concentrations within LNAPL zones.[2]

In particular, the discontinuous residual LNAPL cannot be removed (or recovered) by pumping, and in situ remediation is expensive and not completely effective (see LNAPL Remediation Technologies). However, many regulatory programs require “LNAPL recovery to the extent practicable.” The lack of quantitative metrics and the lack of correlation between apparent LNAPL thicknesses and subsurface LNAPL makes this a problematic requirement in many cases and the ITRC (2018) cautions “Thickness or concentration data alone may not provide a sound basis for defining the point at which a cleanup objective is achieved.”[1] However, Sale et al. (2018) describe metrics such as LNAPL transmissivity, limited/infrequent well thicknesses, decline curve analysis, asymptotic analysis, and comparison to NSZD rates that can be used to determine when LNAPL has been removed the extent practicable[2].

Attenuation Processes are Active and Important

Both LNAPL source zones and their dissolved phase hydrocarbon plumes are attenuated by biodegradation and other attenuation process. In the source zone, this attenuation is called Natural Source Zone Depletion (NSZD) (see also Natural Attenuation in Source Zone and Groundwater Plume - Bemidji Crude Oil Spill). In the dissolved plume it is called Monitored Natural Attenuation (MNA) (see also Biodegradation - Hydrocarbons). These processes generally limit the length of dissolved phase hydrocarbon plumes to a few hundred feet[10] via processes that have been well known and understood since the mid-1990s.

However, NSZD is “by far, the biggest new idea for LNAPLs in the last decade.”[2] Originally, LNAPL bodies were thought to attenuate very slowly via dissolution and volatilization. In 2006, it was discovered that NSZD rates are orders of magnitude higher than originally thought, largely due to direct biodegradation of LNAPL constituents to methane and carbon dioxide by methanogenic consortiums of naturally occurring bacteria[11][12]. NSZD processes play an important role in risk mitigation and the long-term stability of LNAPL bodies[13][1].

At Early Stage LNAPL sites, the expansion of the LNAPL body is a risk that needs to be addressed. Fortunately, this type of site is relatively rare. For Middle and Late Stage sites, the primary risks are associated with phase changes (dissolution of the LNAPL forming a dissolved plume and volatilization from the LNAPL or dissolved plume forming hydrocarbon vapors). As described above, MNA can often control the dissolved phase (see Monitored Natural Attenuation (MNA) of Fuels), while aerobic biodegradation in the unsaturated zone greatly reduces the vapor intrusion risk from hydrocarbon vapors (see Vapor Intrusion - Separation Distances from Petroleum Sources).

Understanding LNAPL body mobility and stability is important to understand the potential risks posed by LNAPL. The relative magnitude of LNAPL mobility can be determined by measuring the LNAPL transmissivity (see NAPL Mobility). If the transmissivity is below a threshold level (in the range of 0.1 to 0.8 ft2/day) then the LNAPL likely cannot be recovered efficiently by pumping, but above this transmissivity level recovery is feasible[1]. Michigan’s LNAPL guidance states “if the NAPL has a transmissivity greater than 0.5 ft2/day, it is likely that the NAPL can be recovered in a cost-effective and efficient manner unless a demonstration is made to show otherwise.” Kansas LNAPL guidance requires “recovery of all LNAPL with a transmissivity greater than 0.8 ft2/day that can be recovered in an efficient, cost-effective manner.”[1]. The stability of the entire LNAPL body can be evaluated using statistical tools to determine if migration of LNAPL is occurring[14]. 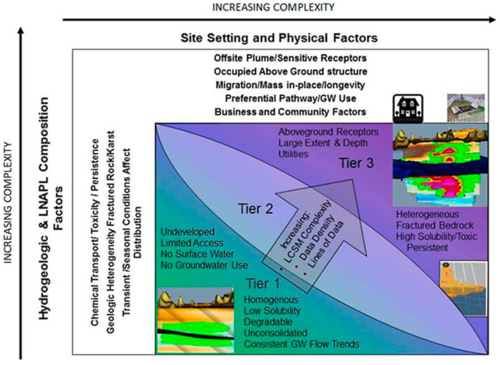 The ITRC (2018) describes the typical evolution of an LCSM over the course of the remediation process which can be broken into three separate stages:

One key question when developing an LCSM is “how much data is enough.” In general, the answer is that the existing data is sufficient for the current stage of the remediation project when it allows the stakeholders to agree on a path forward[1]. Figure 5 shows that as the level of complexity of a site increases, a higher tier of LCSM is useful to provide enough information for making decisions[1][3]. The higher tier of information could be higher data density, additional tools for a given line of evidence, or other evaluations.