Monitored Natural Attenuation (MNA) is an important, common groundwater remediation technology used for treating some dissolved groundwater contaminants. MNA relies on natural attenuation processes to achieve site-specific remediation objectives within a reasonable time frame compared to more active approaches. While MNA has primarily focused on managing plumes with low residual contamination, there is an growing movement to also apply it to source zones via natural source zone depletion (NSZD). Long-term monitoring is required to determine if the concentrations of target contaminants are behaving as predicted.

A number of natural processes can attenuate the concentrations of contaminants in groundwater including biological degradation, abiotic degradation, sorption, dispersion into groundwater adjacent to the contaminant plume, and volatilization to soil gas above the groundwater. As the concentration declines, it may reach a point where it is no longer considered hazardous. If the natural processes that attenuate the concentrations of a particular hazardous chemical can meet the cleanup goals for a site, the processes can provide the basis for a cleanup technology. The United States Environmental Protection Agency (U.S. EPA), defines Monitored Natural Attenuation (MNA) as “the reliance on natural attenuation processes (within the context of a carefully controlled and monitored site cleanup approach) to achieve site-specific remediation objectives within a time frame that is reasonable compared to that offered by other more active methods”[1].

The concentration at which a contaminant is no longer hazardous is defined by U.S. EPA and state regulations. The U.S. EPA regulates the maximum concentration of contaminants that are allowed in water that is supplied as drinking water. These U.S. EPA regulations are referred to as the Maximum Contaminant Level (MCL)[2]. Often, the MCL is selected as the cleanup goal for MNA. However, other goals[3] are occasionally selected.

To accept MNA as remedial technology on the same basis as engineered remedial technologies, it is necessary to characterize the distribution of contamination at a site, characterize the flow of groundwater, understand the processes that contribute to natural attenuation and use this information to build a conceptual model of the site. Sometimes the site conceptual model is used to organize an analytical model of the transport and fate[4] of the contaminants in groundwater. The forecasts of the transport and fate model are compared to the cleanup goals for the site to determine if natural attenuation is an appropriate remedy. If natural attenuation is selected as a remedy, the site is monitored over time to ensure that the attenuation of the contaminant proceeds as anticipated. The entire package of site characterization[5], a site conceptual model, and monitoring[6] are necessary components of MNA as a formal remedy for any site selected.

The U.S. EPA considers three lines of evidence[1] before MNA can be accepted as the remedy for a site:

At most sites, U.S. EPA requires the first two lines of evidence. The third line of evidence is reserved for contaminants that are not well understood.

MNA is often used as a remedy, or part of a remedy, where contaminants have been demonstrated to be degrading or sequestered in groundwater. A number of technical protocols have been developed to guide the application of MNA for particular contaminants, including fuel hydrocarbons[7], chlorinated solvents[8], methyl tert-butyl ether (MTBE[9]), inorganics , metals , radionuclides[10], and explosives[11][12]. These protocols were developed from 1999 to 2010, in the same time period when U.S. EPA developed its policy guidance. Since that time, there have been significant advances[13] in our understanding of the processes that degrade contaminants in groundwater.

Abiotic processes[14] can contribute to natural attenuation of certain contaminants such as chlorinated solvents. For example, chlorinated alkenes can react with naturally occurring magnetite or other iron minerals in aquifer materials[15]. The rate constants are generally slow, but abiotic degradation can be important if the travel time of the contamination to the point of compliance is long. 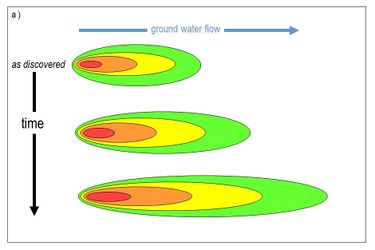 Figure 1a. Evolution of a plume when the plume and source do not attenuate. 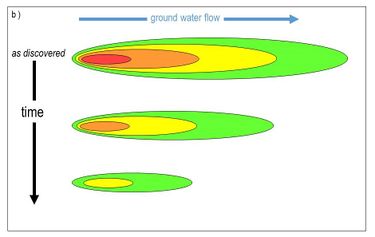 Figure 1b. Evolution of a plume when the source and concentrations in groundwater both attenuate. 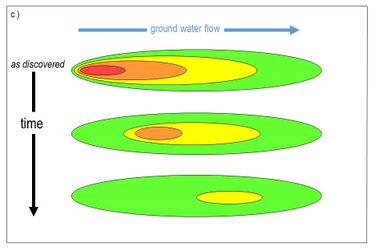 Figure 1c. Evolution of a plume when the source attenuates faster than the plume.

In most plumes, the time frame that is required for natural attenuation to reach a cleanup goal across the entire plume is not controlled by the rate of attenuation in the groundwater. In many plumes, a source of contamination, such as residual oily phase material (non-aqueous phase liquid [NAPL]), contaminated soils, and matrix diffusion sources, provides a continuous supply of new contamination to the groundwater.

As a result, the lifecycle of the source[28] largely controls the lifecycle of contamination in groundwater. As a consequence, at many sites, some attempt is made to actively remediate the source of contamination. In almost every instance, active remediation is successful in reducing the concentration of the contamination, but fails to reduce the concentration to the cleanup goal. The final remedy is a pragmatic combination of active source remediation and MNA. Transport and fate models[29] can be used to evaluate the benefits from source remediation on the size and lifecycle of the plume of contaminated ground water. The models can estimate the reduction in concentration at the source that is necessary to pull a plume back behind a point of compliance and the time that is required for the plume to recede behind the point of compliance.

If a site is regulated under the Resource Conservation and Recovery Act (RCRA)[30], the usual goal is for the contaminants to attenuate to acceptable concentrations before groundwater can migrate off-site and impact receptors. Under this MNA approach, the groundwater must reach a cleanup goal before it reaches a point of compliance. For this implementation, a quantitative framework (BioPIC)[31] is now available that integrates new discoveries on degradation processes into the U.S. EPA’s approach to evaluate MNA.

When a site is regulated under the Comprehensive Environmental Response, Compensation, and Liability Act (CERCLA or Superfund)[32], there is often an additional requirement that all the contamination must reach the cleanup goal by a specified date. The performance of a remedy at a Superfund site is reviewed on a five-year cycle. A framework[33] is available to review long-term monitoring data to determine whether the attenuation within the review cycle is adequate to meet the cleanup goal by the specified date.

Additional information on MNA is available on web pages that are maintained by the United State Environmental Protection Agency[45], the United States Geological Survey[46], Department of Energy, and the Interstate Technology Regulatory Council[47]. In addition, ESTCP has published “Frequently Asked Questions Regarding MNA in Groundwater” which provides a recent summary overview of key approaches, technologies, and best practices for applying MNA[13].