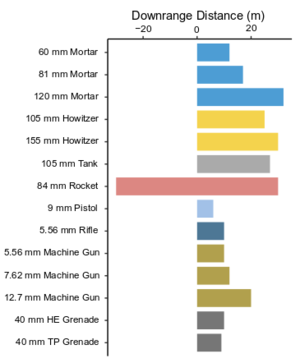 Figure 1: Downrange distance of visible propellant plume on snow from the firing of different munitions. Note deposition behind firing line for the 84-mm rocket. Data from: Walsh et al.[5][6] 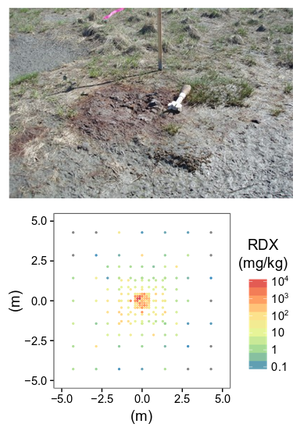 Munitions constituents are released on military testing and training ranges as solid particles from incomplete consumption during firing and detonation. For example, small residual particles containing propellant compounds (e.g., nitroglycerin [NG] and 2,4-dinitrotoluene [2,4-DNT]) are distributed in front of and surrounding firing points (Figure 1). Also, at impact areas and demolition areas, high order detonations typically yield very small amounts (<1 to 10 mg/round) of residual high explosive compounds (e.g., TNT , RDX and HMX ) that are distributed up to and sometimes greater than 24 m from the site of detonation[7].

The particulate nature of munitions constituents in the environment presents a distinct challenge to representative soil sampling. Figure 2 shows an array of discrete soil samples collected around the site of a low-order detonation – resultant soil concentrations vary by orders of magnitude within centimeters of each other. The inadequacy of discrete sampling is apparent in characterization studies from actual ranges which show wide-ranging concentrations and poor precision (Table 1).

ISM is a requisite for representative and reproducible sampling of training ranges, but it is an involved process that is detailed thoroughly elsewhere[2][1][3]. In short, ISM involves the collection of many (30 to >100) increments in a systematic pattern within a decision unit (DU). The DU may cover an area where releases are thought to have occurred or may represent an area relevant to ecological receptors (e.g., sensitive species). 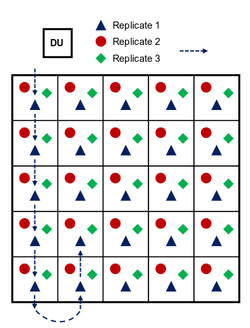 Figure 3. Example ISM sampling pattern on a square decision unit. Replicates are collected in a systematic pattern from a random starting point at a corner of the DU. Typically more than the 25 increments shown are collected

Figure 3 shows the ISM sampling pattern in a simplified (5x5 square) DU. Increments are collected at a random starting point with systematic distances between increments. Replicate samples can be collected by starting at a different random starting point, often at a different corner of the DU. Practically, this grid pattern can often be followed with flagging or lathe marking DU boundaries and/or sampling lanes and with individual pacing keeping systematic distances between increments. As an example, an artillery firing point might include a 100x100 m DU with 81 increments.

DUs can vary in shape (Figure 4), size, number of increments, and number of replicates according to a project’s data quality objectives. 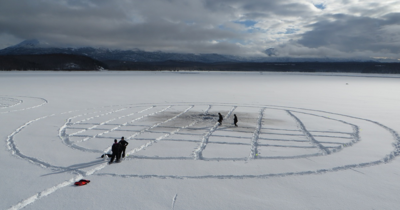 Figure 4: Incremental sampling of a circular DU on snow shows sampling lanes with a two-person team in process of collecting the second replicate in a perpendicular path to the first replicate. (Photo: Matthew Bigl)

In many cases, energetic compounds are expected to reside within the soil surface. Figure 5 shows soil depth profiles on some studied impact areas and firing points. Overall, the energetic compound concentrations below 5-cm soil depth are negligible relative to overlying soil concentrations. For conventional munitions, this is to be expected as the energetic particles are relatively insoluble, and any dissolved compounds readily adsorb to most soils[12]. Physical disturbance, as on hand grenade ranges, may require deeper sampling either with a soil profile or a corer/auger.

Soil sampling with the Cold Regions Research and Engineering Laboratory (CRREL) Multi-Increment Sampling Tool (CMIST) or similar device is an easy way to collect ISM samples rapidly and reproducibly. This tool has an adjustable diameter size corer and adjustable depth to collect surface soil plugs (Figure 6). The CMIST can be used at almost a walking pace (Figure 7) using a two-person sampling team, with one person operating the CMIST and the other carrying the sample container and recording the number of increments collected. The CMIST with a small diameter tip works best in soils with low cohesion, otherwise conventional scoops may be used. Maintaining consistent soil increment dimensions is critical.

The sampling tool should be cleaned between replicates and between DUs to minimize potential for cross-contamination[15].

While only 10 g of soil is typically used for chemical analysis, incremental sampling generates a sample weighing on the order of 1 kg. Splitting of a sample, either in the field or laboratory, seems like an easy way to reduce sample mass; however this approach has been found to produce high uncertainty for explosives and propellants, with a median RSD of 43.1%[2]. Even greater error is associated with removing a discrete sub-sample from an unground sample. Appendix A in U.S. EPA Method 8330B[3] provides details on recommended ISM sample processing procedures.

Incremental soil samples are typically air dried over the course of a few days. Oven drying thermally degrades some energetic compounds and should be avoided[16]. Once dry, the samples are sieved with a 2-mm screen, with only the less than 2-mm fraction processed further. This size fraction represents the USDA definition of soil. Aggregate soil particles should be broken up and vegetation shredded to pass through the sieve. Samples from impact or demolition areas may contain explosive particles from low order detonations that are greater than 2 mm and should be identified, given appropriate caution, and potentially weighed.

The <2-mm soil fraction is typically still ≥1 kg and impractical to extract in full for analysis. However, subsampling at this stage is not possible due to compositional heterogeneity, with the energetic compounds generally present as <0.5 mm particles[7][11]. Particle size reduction is required to achieve a representative and precise measure of the sample concentration. Grinding in a puck mill to a soil particle size <75 µm has been found to be required for representative/reproducible sub-sampling (Figure 8). For samples thought to contain propellant particles, a prolonged milling time is required to break down these polymerized particles and achieve acceptable precision (Figure 9). Due to the multi-use nature of some ranges, a 5-minute puck milling period can be used for all soils. Cooling periods between 1-minute milling intervals are recommended to avoid thermal degradation. Similar to field sampling, sub-sampling is done incrementally by spreading the sample out to a thin layer and collecting systematic random increments of consistent volume to a total mass for extraction of 10 g (Figure 10).