Energetic materials are compounds that release large amounts of energy upon oxidation. They typically have high number of N-O bonds, often in the form of nitro groups. They are used in explosives, such as traditional and insensitive munitions, and propellants, which are used to propel projectiles. Common energetic materials used on US training grounds include trinitrotoluene (TNT), hexahydro-1,3,5-trinitro-1,3,5-triazine (RDX), octahydro-1,3,5,7-tetranitro-1,3,5,7-tetrazocine (HMX), 2,4-dinitrotoluene (2,4-DNT), nitroguanidine (NG), nitroguanidine (NQ), 2,4-dinitroanisole (DNAN), and 3-nitro-1,2,4-triazol-5-one (NTO) (Fig. 1). Liquid propellants, like perchlorate, are not discussed here. 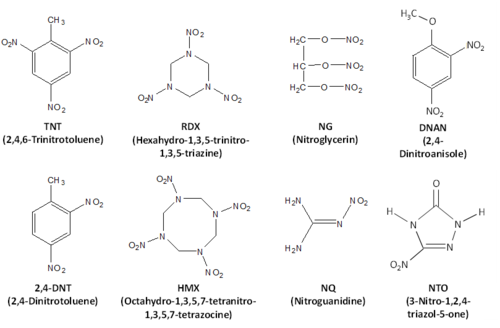 Trinitrotoluene (TNT) is used directly without mixing with other components as a fill for the projectiles, for example in howitzers, but is also part of a number of traditional formulations. Due to relatively low melting temperature (80.35°C), it is often used as a matrix in the melt cast formulations, such as Composition B (Comp B). Comp B (60% RDX, 39% TNT and 1% wax) is one of the most common traditional formulations and is used in both artillery and mortar shells. In Comp B, particles of RDX, material with higher melting temperature, are dispersed in a TNT (material with lower melting temperature) matrix allowing mixing of the two components of the formulation and filling of the shells. Other formulations with TNT include Tritonal (a mixture of 80% TNT and 20% Al used in aerial bombs), Octol, and Comp H-6.

Hexahydro-1,3,5-trinitro-1,3,5-triazine (RDX) is another common explosive material. In addition to Composition B, it is a main constituent in C-4, a demolition explosive composed mostly of military-grade RDX (91%), as well as polyisobutylene, a binder, oil, and di(2-ethylhexyl)sebacate, a plasticizer; Comp A4 (97% RDX and 3% wax used in 40-mm grenades), and Comp H-6 (44% RDX and 29.5% TNT, 21% Al) among many others. RDX is also used in new insensitive munitions formulations IMX 104 and PAX 21.

Octahydro-1,3,5,7-tetranitro-1,3,5,7-tetrazocine (HMX) is an explosive in its own right and is used as main component in Octol (75% HMX and 25% TNT), a fill for antitank rockets, but also appears in formulations that contain RDX as an impurity (about 10% in industrial grade RDX).

Nitroguanidine (NQ) is a part of the triple base propellants, which in addition to nitrocellulose have NG and NQ. M31 used in artillery shells has 20% NG and 55% NQ. NQ is also used in new insensitive munitions formulation IMX 101.

2,4-Dinitroanisole (DNAN) and 3-nitro-1,2,4-triazol-5-one (NTO) are energetic materials used in insensitive munitions, new explosive formulations developed to decrease risk of unintended detonation due to shock or temperature and to ensure safe handling. [6]

Dissolved energetic materials can sorb to soil, slowing their movement and potentially affecting degradation through biological and abiotic mechanisms. Depending on their structure, energetic materials have different chemical properties and different affinity for soils. Soils are heterogeneous mixtures of inorganic and organic components, charged and not charged, non-polar and polar, with different affinities to different energetic materials. Many organic contaminants (polycyclic aromatic hydrocarbons (PAHs), polychlorinated biphenyls (PCBs)) are non-polar, so they have low affinity for water and have very high affinity to non-polar organic solvents, where they accumulate (“partition”) from water. Similarly, soil organic matter can also attract non-polar compounds from soil solution. The majority of energetic compounds, however, are polar. They can also partition to organic matter, but to a smaller extent than non-polar compounds (like PAHs and PCBs). For compounds that exhibit hydrophobic partitioning behavior, polarity of the compound and amount of organic matter in the soil determines how much they will adsorb; lower polarity and greater amount of organic matter results in greater adsorption. Ionic compounds do not partition, but can adsorb to charged parts of the soil through different mechanisms. Clay minerals, metal oxides, and hydroxides (present as small “clay-sized” particles in soils) have charge. Clay minerals are negatively charged and oxides and hydroxides can be either positively or negatively charged depending on soil pH. Negatively charged minerals strongly adsorb positive compounds (not common among energetics) and do not adsorb negatively charged ones, while positively charged oxides can adsorb negatively charged compounds. Since pH influences charge of both energetics and soil constituents, it can also influence adsorption of energetics. In addition, there other types of interactions that can influence adsorption of nitroaromatic explosives discussed below.

To quantify soil adsorption soil scientists and environmental professionals use adsorption coefficient, Kd, a ratio between concentration of compound in soil (Cs) and solution (Cw) at equilibrium:

Kd describes linear adsorption where affinity of compounds for soil does not change with its concentration. This is generally true for partitioning-type adsorption. However, if other mechanisms are involved, it may no longer remain accurate. For example, if specific sites on soil surface, rather than organic matter in general, are participating in adsorption, these sites can be all occupied at high contaminant concentrations and no longer able to adsorb, resulting in decreased affinity.

The Freundlich equation can be used to describe systems where there is a finite capacity for adsorption:

where Kf is Freundlich adsorption coefficient, and n is a parameter that indicates change in affinity of compound with concentration. If n equals 1, adsorption becomes linear. Non-linear adsorption does not allow identification of the sorption mechanism, but indicates that partitioning is not the only mechanism involved in compound adsorption.

There is a retardation factor, R, which indicates how much arrival of compound will be delayed relative to the unreactive tracer. It can be calculated from adsorption coefficients (Kd), bulk density of the soils (ρb) and moisture content (θ), which for saturated conditions would be equal to soil porosity:

For a compound that does not adsorb to soils, R = 1, while sorbing compounds will have values > 1. The larger the retardation, the longer it would take for compound to reach ground water.

The major chemical groups of energetics are nitroaromatics (TNT, 2,4-DNT and 2,6-DNT, and DNAN) and nitramines (RDX and HMX). Nitroglycerin, nitroguanidine, and NTO (nitrotriazole) are the most common representatives of their chemical groups, which also include derivative energetic materials. Below we describe sortion behavior for each of these groups.

When adsorption of organic compounds is driven by hydrophobic partitioning to the organic matter in the soils, the polarity of the molecule is an indication of how well it will adsorb to the soils. Octanol water partitioning coefficient (Kow) is used as a measure of compound polarity, with Kow of 1 indicating equal affinity for polar water and non-polar octanol and higher numbers indicating higher affinity of compound for non-polar solvent and, by extension, for soil organic matter. Nitroaromatic energetic materials have octanol water partitioning coefficients values between 40 and 100 (Log Kow at 25° C for TNT is 1.86 - 2.00, for 2,4-DNT is 1.98, and for DNAN is 1.64), meaning that they would be present in 40 to a 100 times higher concentrations in polar solvent than in water, and therefore are also likely to partition to soil organic matter. This is reflected in relatively high soil adsorption coefficients normalized to organic carbon (logKOC) values for TNT (2.48-3.04)[7] and DNAN (2.24 ± 0.20[1][8] to 2.45 ± 0.16[9]).

However, partitioning to soil organic carbon is not the only mechanism of adsorption for nitroaromatic energetics. Nitroaromatics have less affinity for soils as their concentration increases indicating that they are adsorbed to specific functional groups in the soils. Clay minerals, also called layer silicates or phyllosilicate clays, a common component in fine reactive fraction of the soils, strongly adsorb TNT, 2,4-DNT, and DNAN[10][11]. Adsorption is increased when potassium is exchangeable cation neutralizing the negative charge in clay structures and in swelling clays with larger number of surfaces available for sorption. There are several explanations for mechanism of interaction between clays and nitroaromatics, either direct bond between clay silicate surfaces and nitroaromatic ring structures or indirect through exchangeable cations and nitro-groups of nitroaromatics. In soils, nitroaromatic adsorption by clays is decreased by mixed clay mineralogy, mixed cation composition, and organic and oxide coatings on soil clays[12][13].

Because of the great variability between soils, in order to predict affinity of energetic compounds to any particular soil it is beneficial to be able to identify soil properties that are easily measured and related to already measured adsorption coefficients for other soils. Soil organic carbon and cation exchange capacity of the soils are both good predictors of soil adsorption for nitroaromatic compounds (Fig. 2). Organic carbon can adsorb nitroaromatics through hydrophobic partitioning and other mechanisms, while cation exchange capacity is a good indicator of a type of clay mineral present in the soil.

Transformation products of TNT and DNT, where nitro groups are reduced to amino-groups, can also adsorb to organic matter in the soils, both reversibly[14][15] and irreversibly[16][17][9]. 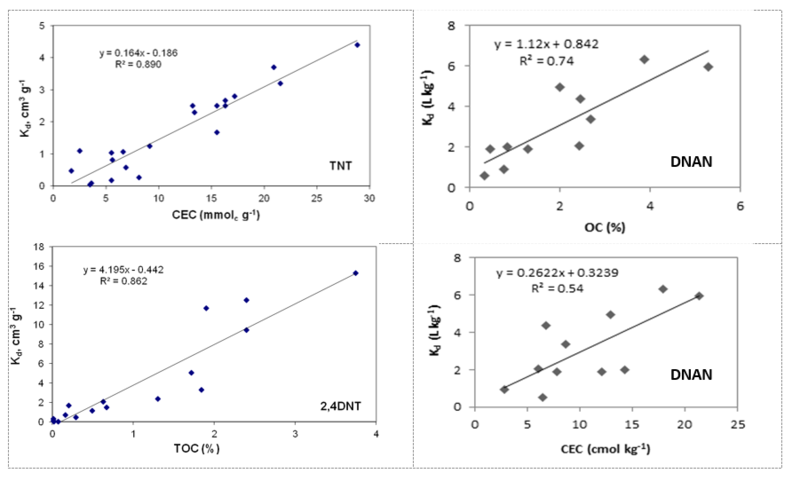 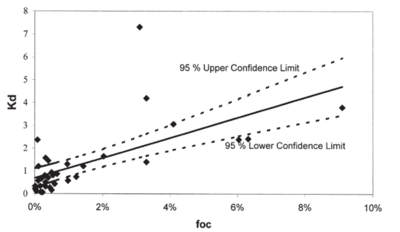 Cyclic nitramines include hexahydro-1,3,5-trinitro-1,3,5-triazine (RDX) and octahydro-1,3,5,7-tetranitro-1,3,5,7-tetrazocine (HMX). RDX and HMX are more polar and have smaller octanol-water partitioning coefficients (Kow) values, 0.86 - 0.90 for RDX and 0.17 for HMX, than the nitro-aromatic compounds, TNT, DNT, and DNAN. RDX also has a lower affinity for soils[14][18][18]. RDX is not adsorbed by clays or iron oxides[10][13]. Adsorption of RDX happens through hydrophobic partitioning to organic matter (isotherms are linear and reversible) and amount of organic carbon in the soils determines extent of RDX adsorption. Significant correlation between RDX Kd values and soil organic-carbon content is observed (Fig. 3). HMX has a similar behavior to RDX, but higher Kd values.

Reported nitroglycerin soil adsorption coefficients range from 0.08 to 3.8 cm3 g−1 (estimated retardation factors between 1.2 and 11 for saturated conditions assuming soil bulk density of 1.3 g cm-3), lower than the ones determined for 2,4-DNT. This agrees within a factor of two lower Kow values (log Kow of 1.62), though a larger difference was measured in Kd values than in Kow values for the two compounds. NG adsorption coefficients are not correlated with organic matter content (P = 0.4945), suggesting that other mechanisms are responsible for adsorption. NG is a polar molecule[19] and may form dipole-dipole and hydrogen bonds with polar moieties in the soils.

NQ is a polar compound, and can become negatively charged due to loss of proton from one of the amino groups (acid dissociation constant of pKa = 12.8), but it is not charged at environmental pH range[20]. It is very weakly adsorbed by soils with reported adsorption coefficients for NTO below 0.60 cm3g–1 (estimated retardation factor below 2.5 for saturated conditions)[4][21][2]. Measured adsorption coefficients normalized to the organic carbon content (log Koc) for NQ range between 0.81 and 1.66[4][21][2]. However, organic carbon content is not a good predictor of NQ adsorption. NQ is a polar compound, has negative or low positive log Kow values (-0.89, 0.148)[22] and therefore is not expected to partition to the organic matter. 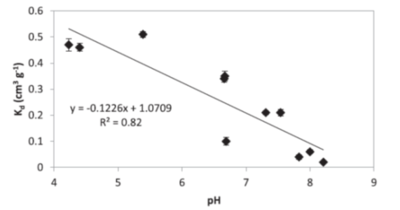 Similarly to NQ, NTO has very low affinity for the soils[23][1][24][25]. Reported values for adsorption coefficients are small (less than 0.6 cm3g−1, estimated retardation factor below 2.5 for saturated conditions) indicating that NTO would stay in solution and will not be attracted to soil surfaces. Majority of soils have net negative charge and NTO molecules at pH values above pH of approximately 3.7 are also negative. Because of decreases in NTO charge when soil pH decreases, at low pHs NTO adsorption to soils increases[1][25] (Fig. 4). A Strategic Environmental Research and Development Program (SERDP)-funded project (ER-2221) showed NTO can adsorb to positively charged oxyhydroxides[11]. OC content is not a good predictor of NTO adsorption and the log Koc) for NTO (1.06 ± 0.40 cm3 g-1)[1] is significantly smaller compared to the literature value for RDX (2.26 ± 0.56 cm3 g-1)[14]. NTO may be either adsorbed to limited positive sites in the soils, such as metal oxyhydroxides or amino-groups in organic matter, or partition to soil organic matter when uncharged at low pHs. Linear isotherms support the second mechanism for NTO adsorption.

Adsorption is one of the ways energetics can be attenuated in soils removing them from solution and delaying their transport to the ground water. Energetic materials exhibit overall low adsorption that varies depending on their chemical structure. Nitroguanidine and 3-nitro-1,2,4-triazol-5-one (NTO) have little or no adsorption, with adsorption coefficients of less than 0.6 cm3 g-1 and estimated retardation factors of less than 2.5; while nitroaromatic compounds, TNT, 2,4-DNT, and DNAN, are adsorbed more strongly (adsorption coefficients, Kds, of less than 10 cm3 g-1, or retardation factors for saturated flow of less than 30, with majority of the soils having lower values. Nitramines (RDX and HMX) have intermediate behavior. Adsorption of energetics is reversible but products of nitroaromatic compound reduction can irreversibly adsorb to soil organic matter.