Perchlorate as an Environmental Contaminant

History of Use and Release to the Environment

Perchlorate is commonly used as an oxidizer in rocket propellants, munitions, fireworks, explosives, airbag initiators for vehicles, matches, and signal flares. It is also present naturally in some fertilizers[1]. Prior to the late 1990s, perchlorate was not generally recognized as a significant environmental concern and few controls were implemented on the release of perchlorate to the environment. In 1997, laboratory methods were developed that detected perchlorate down to 4 parts per billion [ppb], which allowed widespread detection of perchlorate in water samples where it had not previously been identified. The sudden, widespread detection of perchlorate in groundwater highlighted the need to better understand the potential sources, risks, and control measures[2]. 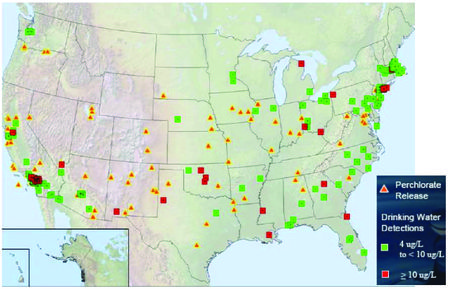 Naturally occurring sources of perchlorate can be found in the Atacama Desert in Northern Chile in caliche deposits of precipitated salts in soil from evaporated wetting fronts[4]. Perchlorate has been detected at Department of Defense (DOD), National Aeronautics and Space Administration (NASA), and defense industry sites involved in the manufacture, testing, and disposal of ammunition and solid rocket fuel. In addition, the disposal of munitions in burial pits, open burning and open detonation also resulted in releases[2][1]. Perchlorate has also been used in applications other than as a solid rocket propellant including: (1) fireworks, (2) safety flares, (3) commercial blasting explosives, (4) automobile airbags, and (4) electrochemically-prepared (ECP) chlorine products. Releases of perchlorate from these sources can also contribute to low levels of perchlorate in soil and groundwater[5].

According to the US General Accounting Office (GAO), perchlorate has been found in water and other media at varying concentrations in 45 states. The U.S. Environmental Protection Agency (EPA) conducted sampling of perchlorate between 2001 and 2005 and reported concentrations at or above 4 ppb in ~ 4% of public water systems. The DoD reported that perchlorate was detected at almost 70% of the 407 installations sampled from 1997 through 2009. Concentrations ranged from > 1 ppb to 2,600 ppm[6].

Perchlorate has the chemical formula ClO4-. It is primarily found as the anion component of a salt associated with one of the following common cations: ammonium (NH4+), sodium (Na+), or potassium (K+). Perchlorate is the deprotonated oxyanion of perchloric acid (HClO4), which is a strong acid with a pKa of < 0. Perchlorate salts are white or colorless crystals while perchloric acid is a colorless oily liquid. The different forms of perchlorate have variable molecular weight, water solubility, and other properties (Table 1[2]).

Perchlorate is highly soluble and mobile in surface or groundwater; it is also relatively stable unless conditions are manipulated to promote anaerobic biological activity. Consequently, when perchlorate is released into groundwater or surface water, it can migrate long distances, as has been reported at the | Olin Flare Facility in Morgan Hill], California where the perchlorate plume extends for more than nine miles[1]. Perchlorate can also be retained in the pore spaces of low permeability materials such as silts and clays, which is a long term threat to water resources. This is problematic in areas where recharge has resulted in rising groundwater elevations, solubilizing perchlorate previously held within the unsaturated soil matrices[2]. Perchlorate is not volatile and is not released into the air or soil gas, but it can be taken up by some food crops, or leaves of other plants[1].

Primary exposure pathways for humans are food and water. Perchlorate exposure primarily impacts human thyroid glands. Hormones produced in the thyroid gland are critical for growth and development in fetuses, infants, and young children, as well as play an important role in regulating metabolism. Perchlorate interferes with iodide uptake into the thyroid gland, which disrupts thyroid function and reduces hormone production[1].

In 2005, the EPA assigned perchlorate a chronic oral reference dose (RfD) of 0.0007 milligrams per kilogram per day (mg/kg-day)[1]. In 2008, the EPA established an Interim Lifetime Drinking Water Health Advisory of 15 µg/L, which is a concentration of perchlorate in drinking water that is not expected to cause any adverse non-carcinogenic effects for a lifetime of exposure.

On February 11, 2011, the EPA determined that perchlorate meets the Safe Drinking Water Act criteria for regulation as a contaminant. The Agency found that perchlorate may have an adverse effect on personal health and is known to occur in public drinking water systems with a frequency and at levels that present a public health concern.

Perchlorate Treatment in Soil and Groundwater

Anaerobic microbial respiration is the most efficient groundwater treatment method, although several chemical or physical-chemical methods are also available. Biological perchlorate reduction can be stimulated in situ or ex situ. Treatment processes for perchlorate are discussed below.

Further information on SERDP/ESTCP-related work conducted on the remediation of perchlorate in soil and groundwater can be found at SERDP-ESTCP: Managing the Environmental Impact of Perchlorate.

Ex situ biological treatment of perchlorate has been conducted in a variety of anaerobic bioreactor systems including: fluidized-bed reactors (FBR), packed-bed reactors (PBR), and continuously stirred tank reactors (CSTR). In a FBR system, microorganisms grow on solid particles, which are maintained in suspension and mixed with incoming water containing perchlorate by a continuous upflow of water in the reactor. PBR systems incorporate high surface area packing media that provides a surface for microorganisms to grow. In a PBR system, the packing material is static and fills the entire reactor. CSTR systems utilize a microbial population suspended in liquid media in the bioreactor. CSTR systems that incorporate membrane filtration to retain biological solids may be referred to as membrane bioreactor (MBR) systems. In all systems an electron donor is added to the influent and the dose of electron donor must be balanced with the incoming concentration of electron acceptors[3].

Perchlorate impacted soil can also be treated above ground in anaerobic biological processes that fully degrade the perchlorate. Treatment of soils can be accomplished in fully saturated, anoxic biocells or bio-piles through the addition of sufficient water and electron donor to stimulate and maintain anoxic conditions[8].

In some situations, where perchlorate is present in soil above the water table (the vadose zone), it may be possible to add water containing a soluble electron donor to encourage biodegradation in the vadose zone and flush remaining perchlorate into the groundwater where it can be treated in a saturated groundwater environment.

Perchlorate can also be removed from extracted groundwater using chemical or physical-chemical methods. Many of these processes generate some form of residual water or solids containing perchlorate, which then need to be disposed of or treated further. Several different processes can be used to treat groundwater including:

Of these treatments, ion exchange is generally the most cost effective and commonly used alternative. Recent improvements in the selectivity of new resins that allow for higher sorption of perchlorate have made the strategy more economically reasonable[3][10].