As the global climate continues to warm, changes in local climate conditions put populations of many species at risk of severe decline and even extinction. Predicting which species are most vulnerable to changing conditions is challenging, because climate interacts with different life stages in complex ways. Population models allow natural resource managers to integrate the effects of climate across life stages and provide a powerful tool to inform management decisions. However, care must be taken to match model structure to a species’ biology and recognize the limitations of the data used to parameterize models when interpreting predictions.

The global climate has been changing throughout the past century, with continued changes predicted over coming decades. Generally, temperatures are getting warmer throughout United States (US) and worldwide[3]. Precipitation patterns are also changing, with some regions of the US getting drier, others getting wetter[3][4].  Further changes are occurring in the timing and duration of precipitation events, with extreme weather events becoming more common[3][4].

As a result of these changes, populations, even entire species, are likely to experience novel conditions that impact individual fitness and population viability. In the case of polar bears, extended periods of low sea ice resulting from atmospheric and oceanic warming have led to the species being protected under the Endangered Species Act[5].

The potential for a changing climate to put populations at risk of extinction creates two imperatives for natural resource managers: 1) detecting climate effects on vital rates such as fecundity, growth and survival, and 2) predicting the overall impact of changing climate on managed species. Importantly, changing climate conditions may have different short and long term effects on populations. For example, a population of eastern tiger salamanders (Ambystoma tigrinum) studied at a breeding pond in Fort Bragg, NC, has been observed to suffer consecutive years of no successful offspring when breeding ponds dry out before larvae could undergo metamorphosis[6][7]. This population would initially benefit from increases in precipitation leading to higher fecundity (reproductive success). However, if higher levels of precipitation convert ephemeral ponds to permanent ponds, many resident amphibians would become vulnerable to increased mortality due to predation by fish and bullfrogs (Lithobates catesbeianus)[8][9].

Previous studies have shown that the effect of changing environmental conditions on a species is best understood by monitoring effects on all life stages[10]. This is particularly true for understanding how a changing climate may impact a species. Climate change typically involves simultaneous changes in numerous climate variables (e.g. temperature and precipitation), which may interact with a species at different points of its life-cycle. For example, summer temperatures impact young (small) plant growth of the tundra plant moss campion (Silene acaulis) while snow cover influences growth and survival of larger plants[11].

Even when there is a single, highly dominant climate driver, it is likely to have different effects on different stages of a species life-cycle. For example, drought reduced San Clemente Bell's sparrow fecundity, but not adult survival[12]. Moreover, the variation in the same climate variable can have opposing effects on different life stages. For example, warmer summer temperatures tend to help moss campion plants grow larger, but decrease the number of fruits produced by plants of a given size[11].

The complex ways in which climate change can impact different species creates a significant challenge to predicting future management needs. Population models can provide a powerful tool for meeting this challenge. Generally, more complex population models capable of integrating climate effects on different life stages are the most useful for predicting species' responses to climate change.  The two types of population models most commonly used for integrating across different life stages are matrix models[13] and individual-based simulations.

Given that climate does influence vital rates, predicting how climate change will impact population growth requires evaluating matrix models reflecting changing transition rates. One approach is to take advantage of year to year variation in climate conditions and use models fit to data during different periods— perhaps corresponding to wet and dry years, or to cool and warm years[18]. The same technique can be used to evaluate changes in the timing of seasonal shifts in climate. For example, Gaillard et al.[18] used matrix models to show that the impact of earlier onset of spring weather on roe deer (Capreolus capreolus) was almost entirely due to differences in fecundity between periods of earlier and later spring weather conditions. This observation highlights another key assumption about using sensitivity or elasticity values to determine monitoring or management priorities with respect to climate change: that climate-driven changes in different vital rates are of the same, relatively small, magnitude.

Individual based simulation models provide an even more general modeling framework. In an individual based model the fate of each individual is tracked through time. Movement and other individual behaviors can be directly incorporated into spatially explicit individual based models, which facilitates looking at interactions between the effects of climate and microhabitat characteristic, on future vital rates. Individual based models are also useful for directly incorporating the effects of demographic stochasticity in small populations. The use of individual based models (also referred to as agent based models) has been facilitated by the development of user-friendly software such as VORTEX[21]and NetLogo[22]. Hudgens et al.[12] used VORTEX to simulate San Clemente sage sparrow (since renamed San Clemente Bell's sparrow) population dynamics to highlight the impacts of introduced predators and potential of more frequent drought under different management scenarios. Social interactions often require custom models, such as the model developed to inform management of red-cockaded woodpeckers (Picoides borealis)[23][24].

Promises and Pitfalls of Population Models

The primary purpose of population models is to integrate our knowledge of a species' ecology. As such, the axiom "garbage-in, garbage-out" applies to population models. Population models that mischaracterize a species' biology are doomed to make inaccurate predictions. Two common modeling mistakes are to oversimplify population structure and failing to account for correlations in how vital rates vary from year to year.

For example, following removal of golden eagles (Aquila chrysaetos) from Santa Cruz Island, island foxes (Urocyon littoralis) expanded rapidly from 2000 to 2005. A subsequent decline in population growth rates by 2008 as fox numbers approached 1000 animals[25] led to speculation among agencies responsible their recovery that the population was approaching carrying capacity. However, an age-structured matrix model showed that changes in the proportion of foxes in different age classes could also lead to the same reduction in population growth rates[26]and subsequent surveys have supported the latter explanation. The near ubiquity of age-related population structure in creatures with lifespans longer than 1-2 years contributes to the widespread use of matrix models in conservation.

Social structures represent another aspect of the biology of many species that, if not properly accounted for, can lead to model failure. In a dramatic example, Zeigler and Walters[27]compared predicted population trajectories for red-cockaded woodpeckers from four population models to observed population dynamics in the Sandhills region of North Carolina. Population projections from the two models that did not incorporate social structure in the form of adult helpers at breeding colonies performed significantly worse than the two models incorporating social structure, even when it was a more complex model.

When using population models to predict a species response to climate change, it is particularly important to consider correlations among vital rates. In many species vital rates are inexorably linked such that changes in one are always associated with changes in others[28]. This kind of tradeoff may also lead to correlations between years in fecundity or growth. A population model presented by Hudgens et al.[12] predicted a high risk of extinction for San Clemente Bell's sparrows associated in part with lack of reproduction during drought years. However, field biologists monitoring the population for the U.S. Navy have subsequently reported extremely high reproductive output in years following drought years. Incorporating this compensatory breeding into the population model substantially lowers both the predicted risk of extinction and predicted potential impact of increased drought frequency on the population (Figure 1).

A final potential issue is the quality of data used to parameterize population models. Small sample sizes divided among numerous classes impose limits on both the precision and certainty of parameter estimates[29]. However, Crone et al.[30] found that sample size did not predict the ability of models to forecast future dynamics of plant populations, perhaps in part because sample size issues may be mitigated by fitting data to smooth functions instead of size classes to increase the precision and reduces the uncertainty of parameter estimates[20].

A more subtle, and potentially more problematic aspect of data quality concerns the applicability of climate-vital rate relationships in non-analogue conditions. For example, Kiekebusch and her colleagues have found that butterfly reproduction did not vary with temperature between 20oC and 28oC in both field and greenhouse experiments[2][31]. However, butterfly fecundity showed a sharp decline with warming temperatures in greenhouse experiments where temperatures exceeded 28oC (Figure 2). 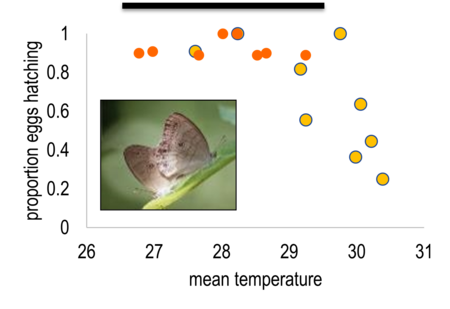 Multiple reviews have concluded that it is extraordinarily difficult to precisely predict future population trajectories using population models[32][33]even when models accurately describe present population dynamics[30]. A significant reason for the historically poor record of population models as predictors is that environmental conditions change[30], and these changes are often related to changing climate patterns. As such, models incorporating both a changing climate and the influence of climate on vital rates are poised to fair better in future assessments.

Moreover, even when population models do not precisely forecast future population trajectories, they still represent useful management tools[34]. For example, the San Clemente Bell's sparrow model by Hudgens et al.[12] that failed to incorporate compensatory breeding nonetheless identified predation as the primary driver of extinction risk. In the seven years that followed the development of that model, increasing nest survival rates were associated with sustained population expansion[35][36].

In some cases, the failure of a model to predict future trajectories points to a lack of understanding of a critical aspect of a species' ecology. For example, the contrast between models with and without social structure highlights the importance of incorporating social structure into red-cockaded woodpecker management practices[27]. In a similar vein, comparisons of population models including and omitting climate effects on vital rates may point to the susceptibility of a species to future climate change and importance of considering climate when planning management actions.

When used appropriately, population models have great potential to increase our understanding of how different species will respond to climate change. This potential is largely untapped as the application of population models linked to a changing climate is still in its nascent stages[13]. It is becoming increasingly common to include climate-drivers of vital rates into population models[37][38][39]. Early examples of population models directly linking population and climate projection models have focused on predicting how changing levels of sea ice are likely to impact polar bears[40] or emperor penguins[41]. Ultimately, the utility of these and other modeling methods as tools to predict species' responses to climate change rests on our understanding of the underlying processes, and hence, maintaining an ongoing feedback loop between model development and evaluation, and population monitoring and experimental studies.