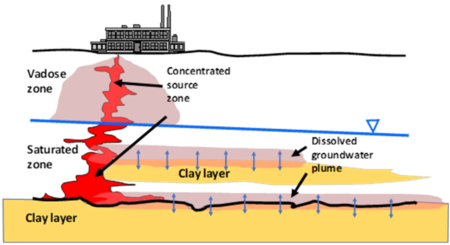 Dissolved contaminants, such as chlorinated volatile organic compounds (CVOCs), are found in groundwater at many current and former industrial sites globally. Plumes of CVOCs dissolved in groundwater often originate when the chemicals enter the subsurface as dense non-aqueous phase liquids (DNAPL). Being heavier than water and immiscible, DNAPLs are particularly problematic because they can spread vertically into the aquifer, generating extensive contaminated groundwater plumes. In Figure 1, CVOCs in DNAPL form are shown in bold red, and the resulting dissolved groundwater plume is represented by the pink halo emanating from the DNAPLs. One of the most significant lessons learned about chlorinated solvents is that their groundwater plumes can persist even when the source DNAPLs have been depleted. Plume persistence in the absence of source materials has been attributed to a phenomenon called matrix diffusion. Matrix diffusion can affect any type of dissolved contaminant, particularly when dissolved concentrations are high relative to regulatory standards. In addition to CVOCs, matrix diffusion can occur with other dissolved contaminants including radionuclides, per- and polyfluoroalkyl substances (PFAS), dissolved petroleum hydrocarbons such as benzene, toluene, ethylbenzene, and xylene (BTEX), and with solvent stabilizers such as 1,4-dioxane. 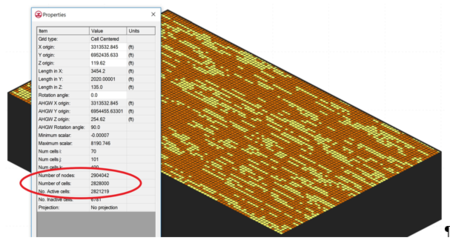 Another type of numerical model of matrix diffusion is the dual-porosity model which is more computationally efficient because it uses a first order approximation to describe the mass transfer between the high K and low K zones. Dual-porosity models can be calibrated to match the effects of matrix diffusion on contaminant concentrations over short time periods. However, the first order mass transfer coefficient is time-dependent[4], so models calibrated to early time data will not accurately simulate concentrations at a later time.

The REMChlor-MD model was developed under ESTCP project ER-201426 to provide a practical alternative to previous approaches for modeling matrix diffusion.

REMChlor-MD employs a semi-analytical method adapted from a heat diffusivity estimation strategy used in petroleum engineering and applied here to the problem of chemical diffusion with first order decay kinetics[5][6]. This semi-analytical method utilizes a fitting function to describe the concentration of the chemical in the low K zones in, or adjacent to, each gridblock:

Because the volume of low K material in the gridblock should equal the product of the interfacial area and the characteristic maximum diffusion length, the third parameter (L) can be calculated from the first two using the volume balance equation for a gridblock of volume V:

This semi-analytical method has undergone thorough testing and proved to be accurate in numerous scenarios[6][7]. The following section shows common test scenarios where the method can be used. 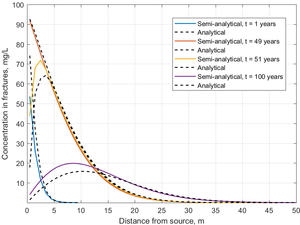 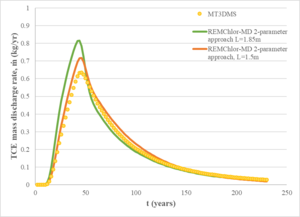 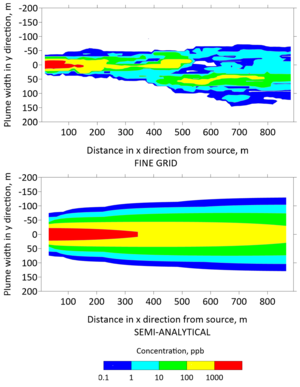 Figure 5: Top view (xy) of concentration contours computed with the fine-grid numerical model (top) and with REMChlor-MD (bottom) at 30 years. 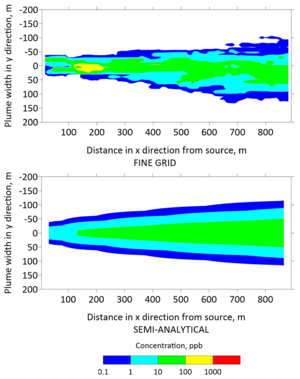 Figure 6: Top view (xy) of concentration contours computed with the fine-grid numerical model (top) and with REMChlor-MD (bottom) at 130 years.

Contaminants in fractured rock media are often the most challenging to remediate because of the small volume of individual fractures and the large surface area of the matrix. Networks of fractures can store a large mass of contaminants and potentially become a secondary source over time.

In the 1-year profile, TCE concentrations in the fractures decreased rapidly with distance, since the steep concentration gradient results in rapid mass transfer from the fracture into the low K matrix. Toward the end of the loading period at 49 years, TCE concentration declines more gradually with distance, since TCE has now diffused into the adjoining low K matrix, reducing the concentration gradient and associated mass flux. At 51 years, one year after source removal, there was a decrease in TCE concentration near the inlet, but almost no effect downstream in the fractures due to back diffusion of TCE from the matrix to the fractures. After 50 years of clean water flushing, back diffusing TCE was still acting as a secondary source, reaching a peak concentration of approximately 16 mg/L. The profiles show a typical fractured system prior to and after source removal with matrix diffusion effects preventing the system from reaching clean-up level. 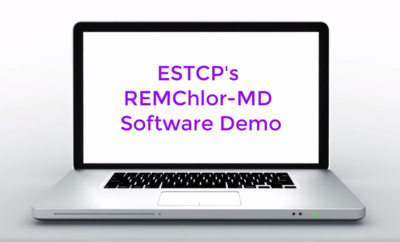 One of the motivations for REMChlor-MD was to develop an alternative to a computationally expensive fine grid model for simulating matrix diffusion. To evaluate the ability of the semi-analytical method incorporated into REMChlor-MD to accurately simulate back-diffusion, a heterogeneous fine grid model was developed[7] using MT3DMS. A geostatistical model generated multiple realizations of the subsurface’s heterogeneity using synthetic borehole data. Using the heterogeneous material distribution of sand and clay, a fine grid flow and transport model, consisting of almost 3 million gridblocks, was created. A TCE source was present near the upgradient end of the model for 30 years and then it was completely removed. Following source removal, clean water was flushed through the system for another 200 years.

For comparison, a REMChlor-MD model was developed with a much coarser grid (about 14,000 gridblocks) where flow and transport parameters were comparable to the fine grid model. The mass discharge at the outlet of the models was used as a comparison criterion between the two models. Figure 4 shows a comparison of the computed mass discharge versus time at the downstream edge of the model. The mass discharge predicted by the 3-million gridblock MT2DMS simulation is shown as the yellow dots. The green line shows the REMChlor-MD prediction based on the geostatistical properties of the high and low K zones (characteristic maximum diffusion length, L= 1.85m). The REMChlor-MD match to the fine-grid MT3DMS model was slightly improved by reducing the characteristic maximum diffusion length (L= 1.5m). Both of these results are similar to the 3-million gridblock MT3DMS simulation result.

Plan view concentrations from the fine grid model and the semi-analytical model were extracted to generate contours of the TCE plume in Figures 5 and 6 after 30 and 130 years, respectively. The top panels of these figures were generated with the fine grid MT3DMS model, whereas the bottom panels were generated with the REMChlor-MD model. The fine grid contour has jagged edges because small changes in concentration were captured at a higher spatial resolution. In contrast, the semi-analytical contour was smoother because the concentration changes were interpolated over larger gridblocks. However, the overall shape and contours from the two models are similar. On a high performance 2018 workstation, the run time for the fine-grid MT3DMS model was many hours, while the REMChlor-MD model completed its run in a little over one minute.

The semi-analytical method was programmed in FORTRAN, and a graphical user interface (GUI) was built using Visual Basic in Excel® to facilitate data inputs and output processing[9]. The Visual Basic REMChlor-MD interface calls the FORTRAN executable using a dynamic link library, and then processes the FORTRAN output files to produce various graphs. A short video tutorial demonstrating data entry and some of the capabilities of REMChlor-MD is shown in Figure 7. Additional detail is provided in an online webinar. The toolkit package, including a user’s manual is available free of charge and can be downloaded here (64bit version) and (32 bit version). Readers are referred to the user manual for a complete explanation of the program, its input parameters, outputs, and examples.