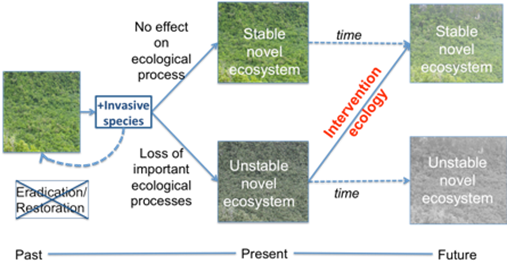 In the case of invasive brown treesnakes on Guam, the snakes already occupied the majority of the island by the time management began, so management efforts were directed at control rather than eradication. The snake had spread throughout the entire island by the time it was linked to the loss of birds in the mid-1980’s. Dr. Julie Savidge ruled out other suspected agents such as disease and pathogens, and temporally and geographically aligned the spread of the snake with the disappearance of birds across the island[13], making a convincing case that the snake was the culprit. However, she still faced difficulties convincing others that a single species of introduced snake was responsible for the alarming disappearance of native birds, so control of the snake didn’t start occurring until 1993. The goal of control has largely been to keep the snakes from establishing on other islands, such as Hawaii. Initial control methods implemented included snake trapping, visual searching, and detector dogs to inspect cargo and planes leaving the island, and concrete barriers to quarantine cargo originating from Guam on snake-free islands[29]. Recently a chemical control method has been developed. This method consists of dropping dead mice with an attached acetaminophen tablet (a toxin for brown treesnakes) from helicopters to the forest canopy where snakes will encounter and consume them. These “mouse-drops” need to occur at regular intervals over a prolonged period to ensure all snakes in an area will be affected[30]. Areas may be enclosed with snake barriers in order to prevent incursion and reach eradication. The barriers erected for this purpose in Guam also serve as effective exclosures for invasive deer and pigs. Researchers are also trying to predict indirect effects of invasive control that may require further management, such as increases in invasive small mammals with the eradication of snakes or increases in weedy plant species with the eradication of ungulates.

In an ideal situation, the invasive species would be eradicated, and then native species restored across the landscape, in turn restoring ecological function. However, complete eradication is often impossible. Instead, invasive population reduction or local eradication combined with restoration of native species or surrogate species within protected areas may be possible. In this section, we describe a proposed conceptual framework (Figure 2) to use when planning invasive control and rewilding scenarios for the purposes of restoring ecological functions.

Figure 2. Conceptual framework for restoring ecological functions in an ecosystem. First, it is essential to identify the ecological services that need to be restored and the species that may be able to provide those services. The next step is to conduct a landscape-level evaluation of the potential spatial distribution of both the service and its provider. Then, both should be combined to identify optimal rewilding areas. Finally, societal constraints should be taken into account to develop effective management strategies and policies.