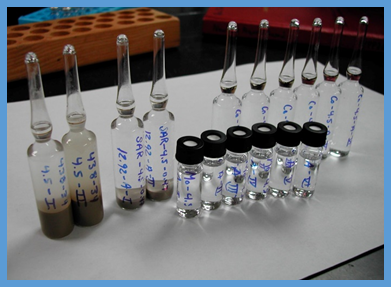 Figure 1a. Batch reactor experiments to generate points on a sorption isotherm (Figure 1b). This Figure shows two samples prepared in duplicate with soil-free control vials and vials to verify the contaminant mass added to the systems[2]. 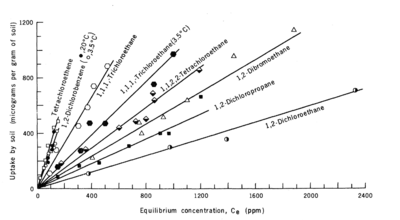 Sorption can be measured in the laboratory by placing a known mass of the contaminant, water, and uncontaminated sediment in a batch reactor (Figure 1a). The system is mixed for a specific duration (contact time) and then the aqueous and sorbed contaminant concentrations are determined. This process is repeated, adding a range of different initial contaminant masses to achieve a range of aqueous contaminant concentrations. When the experiment is run at constant temperature until the concentrations in the solid and liquid phases approach equilibrium, the resulting data plot is termed an isotherm. Figure 1b shows linear sorption isotherms for eight compounds measured in one soil. 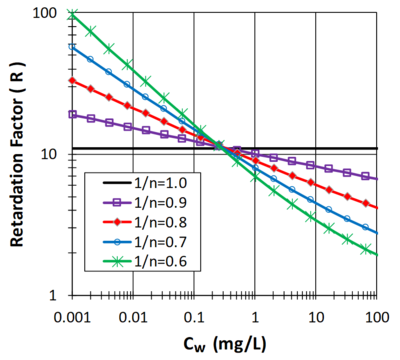 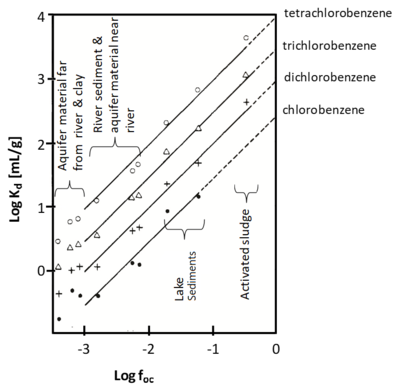 where ρb is the bulk density of the solid phase and θw is the water filled porosity. When sorption is non-linear and is described with the Freundlich isotherm equation, R can be estimated as:

Figure 2 illustrates the effect of Cw on R when 1/n is less than 1 and ρb = 1.5 g/cm3, θw = 0.3 mL/cm3and KF = 2. When 1/n is less than 1, sorption has limited effect in slowing the migration of a high concentration plume (Cw > 10 mg/L). However, as the aquifer is remediated and contaminant concentrations drop below 0.1 mg/L, non-linear sorption has a much more pronounced impact, slowing aquifer cleanup.

Multiple studies[4][5][6] showed that sorption of nonpolar organic contaminants is typically proportional to the organic carbon content of the solid phase (Figure 3). When this occurs, an organic carbon normalized partitioning coefficient, Koc, is used:

Experimental investigations (summarized in Allen-King et al., 2002[7]) with a variety of sorbents and contaminants has shown that Koc values are correlated with contaminant hydrophobicity. This allows Koc to be estimated using empirical correlations with the contaminant aqueous solubility or octanol-water partition coefficient (Kow) (Figure 4). Using this approach, Kd can be estimated using site specific measurements of foc and literature values of contaminant properties. 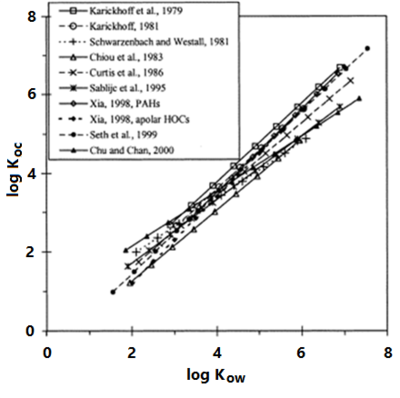 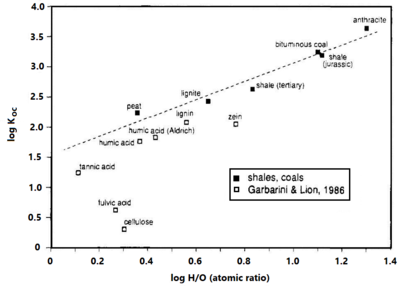 Research reviewed by Allen-King et al. (2002)[7] Cornelissen et al. (2004)[9], and Huang et al. (2003)[10] indicates that some types of organic matter are much stronger sorbents than others. Experimental results show that thermally altered carbonaceous materials (TACMs), such as coals, kerogen and black carbons, will sorb greater concentrations of nonpolar organic contaminants than unaltered organic materials per gram of carbon (Figure 5), especially at low concentrations relative to solubility. TACMs are more condensed than their unaltered precursors, and have a lower oxygen content, and higher aromatic content than unaltered materials. Sorbed concentrations to TACM can be 10 to 100 times greater at equilibrium than the amount sorbed to less condensed forms of organic matter on a per-gram-carbon basis.