The subgrade biogeochemical reactor (SBGR) is a relatively low cost, sustainable bioreactor configuration that can be applied to remediate soil and groundwater source zones. SBGRs are most commonly constructed by excavating a soil source area and filling the void with gravel, mulch, and other in situ treatment amendments through which contaminated groundwater is infiltrated for treatment. In addition to treatment of groundwater within the SBGR, this technology allows recirculation of lower concentration water and in situ treatment amendments through the aquifer, which can sustain treatment over several years.

Subgrade biogeochemical reactors (SBGRs), also commonly referred to as bioreactors, have been used in the remediation industry for treatment of chlorinated volatile organic compounds (CVOCs) since the early 2000s (Fig. 1)[3][4][1][2]. 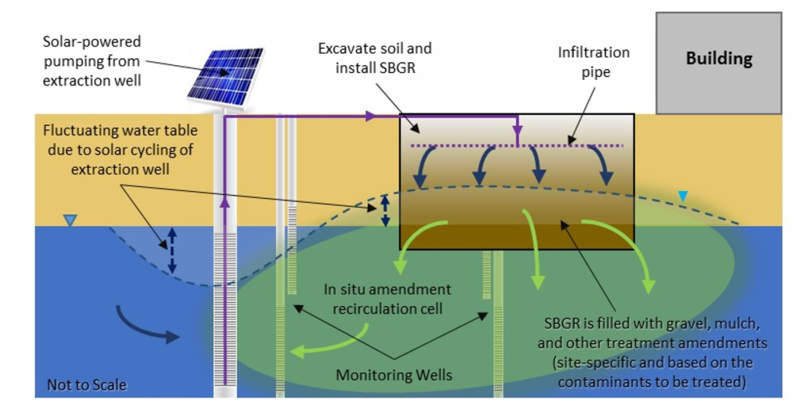 SBGRs are an in situ remediation technology for treatment of contaminated source areas and groundwater plume hot spots[2]. They consist of components or processes that have been used in other forms in the remediation industry, but package them in a different way that can produce a cost-effective and sustainable remediation approach. For example, an SBGR approach may be a cheaper, more effective, and more sustainable solution compared to ex situ treatment technologies such as dual phase extraction with thermal oxidation, other pump and treat configurations, etc.

The optimal conditions for installation of an SBGR include:

Typically, contaminated soils in a known source area are first removed using an excavator, or large-diameter augers if the depth to groundwater is excessive or it’s required to accommodate site logistical concerns. Soil management approaches may include offsite soil disposal, onsite treatment, or reuse as backfill on top of the reactor, as appropriate based on site-specific requirements.

The excavation void space (most commonly 200 - 500 cubic yards) is then filled with amendments tailored to treat the target contaminants. For example, a mixture of gravel, composted mulch, and other organic amendments such as vegetable oil are commonly applied at CVOC sites to stimulate reductive dechlorination[1][2].

The gravel supports structural stability within the SBGR and maintains a permeable and well-mixed environment to provide uniform treatment inside the SBGR. A variety of recycled tree, farm, or agricultural byproducts are often used to create the mulch. Well-composted wood mulch promotes the long-term generation of bioavailable organic carbon and provides media for the growth of microorganisms responsible for the biological degradation of target contaminants. Cellulosic substrates such as composted wood mulch can provide up to 44% more total organic carbon compared to mixed organic waste substrates[5]. Therefore, wood mulch should constitute the greatest percentage of the overall mulch composition. However, a smaller percentage of alternative mulch amendments such as cotton gin waste or wheat straw can also be added, as required to support different bacterial populations such as sulfate degraders[2][6]. The life span of the mulch is dependent on site-specific factors and the type used. Past experience indicates that elevated dissolved organic carbon will persist for ~ 4 to 6 years when using a well-composted hardwood mulch[2][7]. As dissolved organic carbon concentrations decline, the SBGR can be “recharged” with a liquid organic substrate, such as emulsified vegetable oil.

Several additives have been used to increase the biological and chemical reduction potential of SBGRs. For example, vegetable oil (preferably recycled) has been sprayed on the mulch prior to construction to allow the sustained slow-release of dissolved organic carbon, which can reduce biological acclimation times and speed initial microbial growth. Iron amendments, including magnetite and iron pyrite sands have been added to promote abiotic reduction[2]. To date, SBGRs have not included bioaugmentation because appropriate bacteria have been naturally available. However, adding a bioaugmentation culture to the SBGR could be effective at sites where native bacteria are not sufficient.

A low-flow pumping system (typically ~ 2 gallons per minute) is connected to infiltration piping within the SBGR to recirculate contaminated groundwater through the SBGR for treatment (Fig. 1). Treated groundwater is then recirculated from the SBGR towards the extraction well(s). Solar powered pumping systems have been used at multiple sites to reduce power consumption and reduce costs at remote locations[2][8][9][10][7][11].

Cycling of the lower concentration groundwater that contains in situ treatment amendments from the bottom of the SBGR helps to degrade contaminants within the aquifer between the SBGR and extraction well(s). SBGRs also circulate treatment amendments through the capillary fringe and adjacent saturated soils, which can treat a greater volume of contaminated soils and groundwater compared to typical in situ injection technologies. These are added benefits over remediation technologies that do not incorporate groundwater recirculation.

SBGRs typically require little maintenance and can have a lower environmental footprint compared to other in situ and ex situ technologies[2][12]. Locally sourced organic byproducts, such as orchard wastes, cotton gin trash, recycled cooking oils, and composted tree mulch, have been used as SBGR backfill material in enhanced reductive dechlorination applications. Other waste products such as unused scraps of drywall from new construction sites have been used as a source of gypsum for sulfate-enhanced biodegradation of fuel contamination. Use of these local resources has increased green and sustainability metrics and yielded economic benefits.

Some site conditions are not favorable for the SBGR technology. These conditions typically include:

Performance can also be limited if the organic composition of the backfill relative to the desired biological or biogeochemical processes within the SBGR are not carefully considered[1][2][6][5][13]. However, some of these limitations can be overcome during the design phase.

Here, we summarize a high-level performance overview of SBGRs that have been installed in a wide range of geographic locations (California, Alaska, Oklahoma, Kansas, Mississippi, North Carolina, Puerto Rico, and Washington). To date, most SBGRs with at least 1 year of performance data have been installed at chlorinated solvent sites[8][14][9][10][7][11]. At these sites, total molar CVOC concentration reductions within and adjacent to the SBGR are typically 85 to 90% after 1 year of operation. However, concentration reductions have been less than this (~50 to 80%) in low permeability and low groundwater temperature aquifers[10][11].

Let’s consider an example of observed SBGR performance under standard design conditions for two chlorinated solvent sites at Travis Air Force Base in California (Fig. 2)[7]. The data represent total molar concentration reductions of dissolved chlorinated solvent constituents within the source area aquifer at a monitoring well location between the extraction well and the SBGR.

Research is ongoing to further identify and quantify the degradation processes that occur within SBGRs. However, some of the key lessons learned for proper SBGR design based on field data collected to date are as follows: