Electrical Resistance Heating (ERH) utilizes heating produced by passing electricity through the subsurface to mobilize contaminants, which can then be extracted. ERH has gained wide acceptance and is commonly used for treatment of source zones with volatile organic contaminants. The most common applications have been for chlorinated solvents sites in difficult matrices, such as silt and clay settings. Heating is produced by passing alternating current through the formation between electrodes, which are customized to site conditions. ERH can be combined with less aggressive methods for complete site and plume restoration (e.g., see Thermal Remediation - Combined Remedies).

The principle of ERH is to heat the treatment volume by passing electricity through it, causing the soil and water to heat to temperatures that mobilize the contaminants for extraction (Figure 1). Typical ERH systems utilize three-phase alternating current applied to buried electrodes spaced systematically throughout the thermal treatment zone (TTZ) in a triangular pattern. An early variation of ERH used six phases of electricity. For sites with treatment zone thickness over 5 meters (16 ft), multiple elements may be stacked within an electrode borehole to customize applied voltages to the subsurface. Contaminants are removed by extraction from the electrodes and/or from separate extraction wells. A cooling and treatment system is used to separate and treat the extracted water, steam, air and contaminants on site. 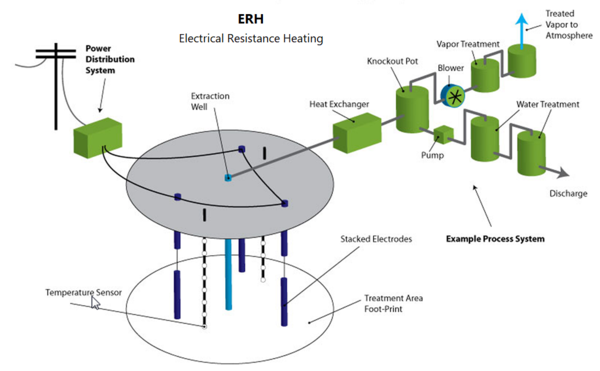 ERH requires the presence of soil moisture and groundwater to conduct electricity, and therefore can be applied at low (<100°C) to moderate (~100°C) temperatures to accomplish the remediation of a wide variety of contaminants, both above and below the water table[1].

In a modification of ERH water is extracted and treated in separate wells, then recirculated into custom electrodes to facilitate heating by inducing convection[3]. This expands the use of ERH to more permeable formations, since some of the injected water is turned into steam, which adds to the heating.

Because ERH is based on heating by electrical resistance, it can be used above and below the water table. Water is needed for facilitating heating, so target temperatures are restricted to local boiling point temperatures. ERH has been used most frequently to treat volatiles such as trichloroethene (TCE) and tetrachloroethene (PCE). Example contaminants of concern include:

Target treatment temperatures are typically 90-100°C. Additionally, low temperature ERH has been implemented at sites where the remedial goal is enhancing abiotic and biotic processes, such as the biodegradation of chlorinated solvents[5] or hydrolysis of munition compounds[6].

ERH is scalable and well-suited for small shallow sites or large deep sites, and when properly implemented it can lead to effective site closure. ERH is very tolerant of subsurface heterogeneities and performs as well in low permeability clays and silts as higher permeability sands and gravels[7]. When combined with Steam Enhanced Extraction (SEE), effective solutions are available for sites with substantial groundwater flow as well[8]. When the treatment zone is well delineated, and the ERH system designed and implemented correctly, high removal efficiencies can be achieved.

ERH has been applied to over 200 sites worldwide. Example cases include:

Electrical Resistance Heating can be used to treat volatile organic compound (VOC)-contaminated source zones to low levels in tight formations such as silts and clays. By heating the target volume to near the boiling point of water, contaminants are volatilized and removed for treatment or destruction on site.