Steam enhanced extraction (SEE) is an in situ thermal remediation technology used in relatively permeable settings to heat the ground and remove organic contaminants. SEE can be combined with other thermal methods for treatment of source areas with clay layers, and with less aggressive treatment methods for source and plume restoration (see also Thermal Remediation - Combined Remedies).

The principle of SEE is to heat the subsurface aggressively while containing and extracting the mobilized contaminants. A typical SEE system consists of a steam generator, a thermal well field, extraction wells and pumps, and an effluent treatment system (Figure 1). 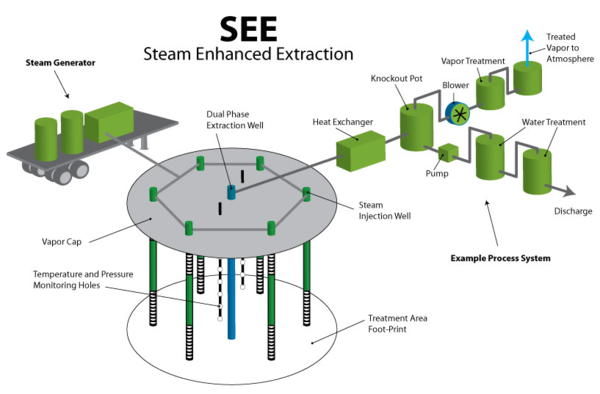 SEE achieves on-site heating and treatment through steam injection into wells and extraction of hot fluids from multi-phase extraction wells[1]. SEE is governed by steam propagation and heat transfer to the formation and has been applied for enhanced oil recovery as well as remediation of a wide range of contaminants. SEE utilizes the following contaminant removal mechanisms[2][3]:

Equipment used for SEE includes a steam generator and an effluent treatment system for cooling, separation, and treatment of the extracted vapors and fluids. Figure 2 shows an example of the equipment used. 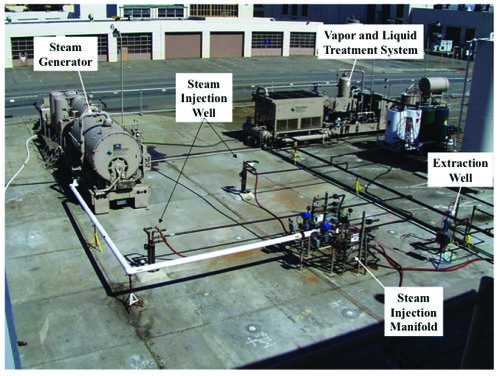 Steam is typically generated by burning fossil fuels such as natural gas, propane, or diesel. Softened water is vaporized to steam and conveyed to injection wells through manifolds. Valves on each injection well regulate the steam injection pressure. A safe injection pressure of 0.5 psig (pounds per square inch gage) per foot of overburden above the screen is recommended.

Extraction wells are dual-phase wells, typically equipped with downhole pumps and vacuum extraction. Liquid entrainment is also used for fluid extraction and can be effective at creating a predetermined drawdown and hydraulic containment[4].

Steam does not penetrate tight layers easily. Removal of contaminants from lower permeability zones can be accelerated by the use of pressure cycling. Such cycling is induced in the formation after steam has reached the extraction wells, and is conducted by varying steam injection pressures and rates over time, causing pressure variations and temporal boiling events in the subsurface. This enhances volatilization of contaminants from zones immediately outside the steam zone, reducing contaminant concentrations in these areas.

Typical SEE systems operate between 2 and 12 months and use a spacing between wells of 15 to 100 ft. Deeper sites typically use wider well spacing.

SEE is used at sites with moderate to high permeability and/or groundwater flow. The SEE technology allows for high net extraction of fluids and displaces large amounts of groundwater towards the extraction wells. As a result, less water has to be heated to allow the formation to reach target temperatures. In addition, this displacement facilitates hydraulic control of NAPL mobility. As the steam sweeps through the formation, the accompanying pressure gradient displaces the mobilized NAPL and vaporized components as an oil front, which is recovered when it reaches the extraction wells. The design of injection and extraction wells and their locations is critical for good SEE results.

Because SEE is based on the injection of steam, it can be used above and below the water table and can achieve treatment zone temperatures that reach the local boiling point of water. SEE has been used routinely to treat volatiles such as trichloroethene (TCE) and tetrachloroethene (PCE), as well as oils and light non-aqueous phase liquids (LNAPLs)[1]. Example contaminants of concern (COCs) include:

For hydrocarbons such as heavy oils, SEE is used both to reduce viscosity and to displace the mobilized oil phase towards the extraction wells. At such sites, complete contaminant removal is not practical. The more volatile fraction of the oil is removed, with the heavier fraction left behind. A benefit of SEE is the ability to conduct pressure cycling to improve contaminant removal rates. After the target zone has been heated and the majority of the NAPL extracted as a liquid, pressure cycling is induced by varying the injection pressure and the applied vacuum. This process has been shown to result in very low concentrations of volatile contaminants remaining in the original source zone. 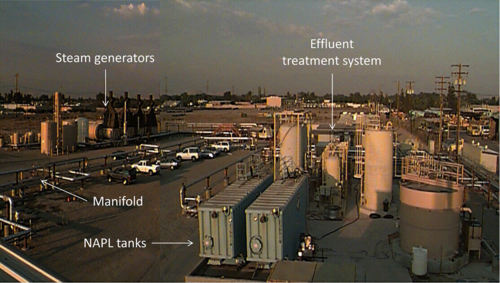 SEE has also been an integral part of several sites where TCH or ERH were also used.

SEE is a thermal technology well suited for medium to high permeability source zones. Contaminants are removed by displacement (in NAPL and dissolved form) and by vaporization. When combined with TCH or ERH, complex sites with high and low permeability zones can be effectively remediated.