Groundwater contamination with dissolved contaminants, such as chlorinated volatile organic compounds (CVOCs), is pervasive at many current and former industrial sites globally.

Plumes of CVOCs dissolved in groundwater often originate when the chemicals enter the subsurface as dense non-aqueous liquids (DNAPL). Being heavier than water and immiscible, DNAPls are particularly problematic because they can spread vertically into the aquifer, generating extensive dissolved groundwater plumes. In Figure 1, CVOCs in DNAPL form are shown in bold red, and the resulting dissolved groundwater plume is represented by the red halo emanating from the DNAPLs. One of the most significant lessons learned about chlorinated solvents is that their groundwater plumes can persist even when the source DNAPLs have been depleted. Plume persistence in the absence of source materials has been attributed to a phenomenon called matrix diffusion. Matrix diffusion can affect any type of dissolved contaminant, particularly when dissolved concentrations are high relative to regulatory standards. In addition to CVOCs, matrix diffusion can occur with other dissolved contaminants including radionuclides, per- and polyfluoroalkyl substances (PFAS), dissolved petroleum hydrocarbons such as benzene, toluene, ethylbenzene, and xylene (BTEX), and with solvent stabilizers such as 1,4-dioxane. 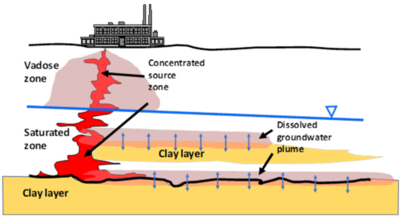 Dual-porosity models are another type of numerical model that is more computationally efficient because it uses a first order approximation to describe the mass transfer between the high K and low K zones. Dual-porosity models can be calibrated to match the effects of matrix diffusion on contaminant concentrations during early times. However, the first order mass transfer coefficient is time-dependent[4], so models calibrated to early time data will not accurately simulate concentrations at a later time. The REMChlor-MD model was developed under ESTCP project [https:\www.serdp-estcp.org\Program-Areas\Environmental-Restoration\Contaminated-Groundwater\Persistent-Contamination\ER-201426 ER-201426] to provide a practical alternative to traditional approaches for modeling matrix diffusion. 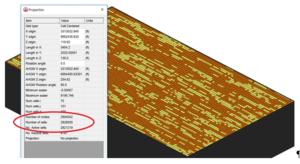