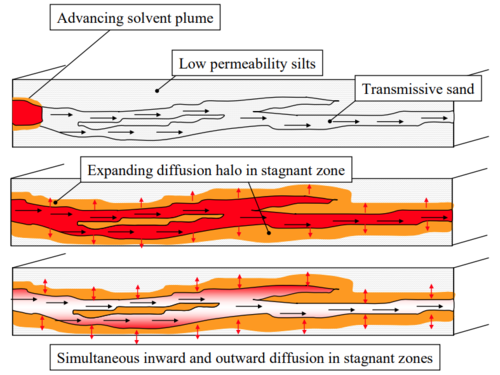 In some cases, matrix diffusion can maintain contaminant concentrations in more permeable zones above target cleanup goals for decades after the primary sources have been addressed. At a site impacted by Dense Non-Aqueous Phase Liquids (DNAPL), trichloroethene (TCE) concentrations in downgradient wells declined by roughly an order-of-magnitude (OoM) when the upgradient source area was isolated with sheet piling. However, after this initial decline, TCE concentrations appeared to plateau or decline more slowly, consistent with back diffusion from an underlying aquitard. Numerical simulations indicated that back diffusion would cause TCE concentrations in downgradient wells at the site to remain above target cleanup levels for centuries[1].

Several different modeling approaches have been developed to emulate the diffusive transport of dissolved solutes into and out of lower K zones. The Matrix Diffusion Toolkit[9] is a Microsoft Excel based tool for simulating forward and back diffusion using two different analytical models[12][13]. Numerical models including MODFLOW/MT3DMS[14] have been shown to be effective in simulating back diffusion process and can accurately predict concentration changes over 3 orders-of-magnitude in heterogeneous sand tank experiments[15]. However, numerical models require a fine vertical discretization with short time steps to accurately simulate back diffusion, greatly increasing computation times[16]. These issues can be addressed by incorporating a local 1-D model domain within a general 3D numerical model[17].