1,2,3-Trichloropropane (TCP) is a chlorinated volatile organic compound (CVOC) that has been used in chemical production processes, in agriculture, and as a solvent, resulting in point and non-point source contamination of soil and groundwater. TCP is mobile and highly persistent in soil and groundwater. TCP is not currently regulated at the national level in the United States, but maximum contaminant levels (MCLs) have been developed by some states. Current treatment methods for TCP are limited and can be cost prohibitive. However, some treatment approaches—particularly in situ chemical reduction (ISCR) with zero valent zinc (ZVZ) and in situ bioremediation (ISB)—have recently been shown to have potential as practical remedies for TCP contamination of groundwater.

Some communities and businesses have begun to improve their resilience to climate change by building adaptation plans based on national scale climate datatsets (National Adaptation Plans), regional datasets (New York State Flood Risk Management Guidance[5]), and datasets generated at local spatial resolutions. Resilience to the changing climate has also been identified by the US Department of Defense (DoD) as a necessary part of the installation planning and basing process (DoD Report on Effects of a Changing Climate[6]). More than 79 installations were identified as facing potential threats from climate change. The threats faced due to changing climate include recurrent flooding, droughts, desertification, wildfires and thawing permafrost.

Assessing the threats climate change poses at regional and local scales requires data with higher spatial resolution than is currently available from global climate models. Global-scale climate models typically have spatial resolutions of 100 to 300 km, and output from these models needs to be spatially and/or temporally disaggregated in order to be useful in performing assessments at smaller scales. The process of producing higher spatial-temporal resolution climate model output from coarser global climate model outputs is referred to as “downscaling” and results in climate change projections (datasets) at scales that are useful for evaluating potential threats to regional and local communities and businesses. These datasets provide information on temperature, precipitation and a variety of other climate variables for current and future climate conditions under various greenhouse gas (GHG) emission scenarios. There are a variety of web-based tools available for accessing these datasets to evaluate potential climate change impacts at regional and local scales. 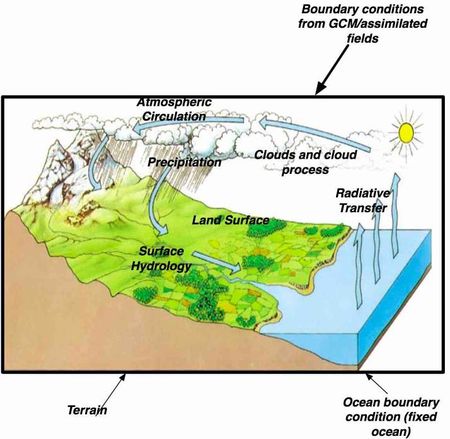 Figure 1. Typical processes and spatial scales of Regional scale Climate Models. The models may calculate circulation in the atmosphere, cloud processes, precipitation, and land-atmospheric and ocean-atmospheric processes on a limited portion of the Earth, with boundary conditions provided by a Global Climate Model.[1]

There are two main approaches to downscaling. One method, commonly referred to as “statistical downscaling”, uses the empirical-statistical relationships between large-scale weather phenomena and historical local weather data. In this method, these statistical relationships are applied to output generated by global climate models. A second method uses physics-based numerical models (regional-scale climate models or RCMs) of weather and climate that operate over a limited region of the earth (e.g., North America) and at spatial resolutions that are typically 3 to 10 times finer than the global-scale climate models. This method is known as “dynamical downscaling”. These regional-scale climate models are similar to the global models with respect to their reliance on the principles of physics, but because they operate over only part of the earth, they require information about what is coming in from the rest of the earth as well as what is going out of the limited region of the model. This is generally obtained from a global model. The primary differences between statistical and dynamical downscaling methods are summarized in Table 1.

It is important to realize that there is no “best” downscaling method or dataset, and that the best method/dataset for a given problem depends on that problem’s specific needs. Several data products based on downscaling higher level spatial data are available (USGS, MACA, NARCCAP, CORDEX-NA). The appropriate method and dataset to use depends on the intended application. The method selected should be able to credibly resolve spatial and temporal scales relevant for the application. For example, to develop a risk analysis of frequent flooding, the data product chosen should include precipitation at greater than a diurnal frequency and over multi-decadal timescales. This kind of product is most likely to be available using the dynamical downscaling method. SERDP reviewed the various advantages and disadvantages of using each type of downscaling method and downscaling dataset, and developed a recommended process that is publicly available[1]. In general, the following recommendations should be considered in order to pick the right downscaled dataset for a given analysis:

The uncertainties in climate projections over shorter timescales, less than 30 years out, are dominated by something known as “internal variability” in the models. Different approaches are used to address the uncertainty from internal variability[4]. A third type of uncertainty in climate modeling, known as scientific uncertainty, comes from our inability to numerically solve every aspect of the complex earth system. We expect this scientific uncertainty to decrease as we understand more of the earth system and improve its representation in our numerical models. As discussed in Climate Change Primer, numerical experiments based on global climate models are designed to address these uncertainties in various ways. Downscaling methods evaluate this uncertainty by using several independent regional climate models to generate future projections, with the expectation that each of these models will capture some aspects of the physics better than the others, and that by using several different models, we can estimate the range of this uncertainty. Thus, the commonly accepted methods for accounting for uncertainty in climate model projections are either using projections from one model for several emission scenarios, or applying multiple models to project a single scenario.

A comparison of the currently available methods and their characteristics is provided in Table 2 (adapted from Kotamarthi et al., 2016[1]). The table lists the various methodologies and models used for producing downscaled data, and the climate variables that these methods produce. These datasets are mostly available for download from the data servers and websites listed in the table and in a few cases by contacting the respective source organizations.

The most popular and widely used format for atmospheric and climate science is known as NetCDF, which stands for Network Common Data Form. NetCDF is a self-describing data format that saves data in a binary format. The format is self-describing in that a metadata listing is part of every file that describes all the data attributes, such as dimensions, units and data size and in principal should not need additional information to extract the required data for analysis with the right software. However, specially built software for reading and extracting data from these binary files is necessary for making visualizations and further analysis. Software packages for reading and writing NetCDF datasets and for generating visualizations from these datasets are widely available and obtained free of cost (NetCDF-tools). Popular geospatial analysis tools such as ARC-GIS, statistical packages such as ‘R’ and programming languages such as Fortran, C++, and Python have built in libraries that can be used to directly read NetCDF files for visualization and analysis.