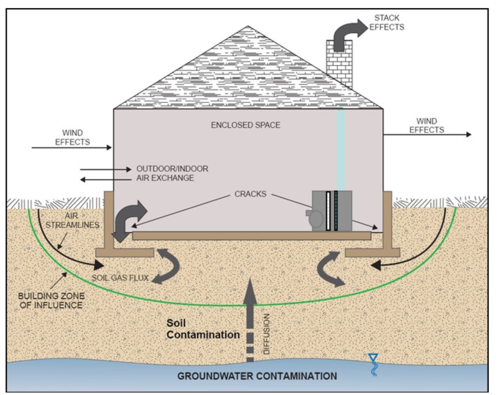 As volatile compounds in soil gas migrate toward the surface, they encounter the building’s zone of influence where advective air movement becomes more dominant. advective transport occurs when there is a difference in pressure between the subsurface and indoor spaces. This pressure differential is related to factors such as the stack effect (the movement of air into and out of buildings, chimneys, flue gas stacks, or other containers, resulting from air buoyancy); operation of the heating, ventilation, and air conditioning (HVAC) system; and wind pressure on the building exterior. Buildings when even slightly depressurized relative to the subsurface may be more prone to VI. Vapor entry may occur through openings in floors and walls (such as cracks and foundations gaps). In addition, atypical preferential pathways or entry points like floor drains and utilities can act as vapor conduits and enhance vapor transport into buildings. Examples of pathways for vapor entry into a building are numerous and include floor cracks, floor drains, plumbing penetrations, mortar joints in foundations, etc.

Based on the tendency for vapor migration, VI guidance generally recommends that buildings within 100 feet of locations known to have chlorinated volatile contaminants above soil and groundwater screening levels undergo a VI evaluation[10][1]). For petroleum hydrocarbons, which more readily undergo biodegradation in soil, this distance is reduced to 30 feet[4][11].

The current approach in most regulatory guidance involves examining the concordance in multiple lines of evidence, which may include groundwater, soil gas, sub-slab and/or indoor air sampling data, building survey and chemical use information, and data from controlled building depressurization testing or other advanced techniques if available, to determine if VI pathways into buildings are complete and significant. In recent years, there has been increased acceptance of longer (14 day) time-weighted sorbent based samplers as an alternative to short-term (1 day) vapor sampling using summa canisters[12][13]. However, some regulators require use of 1-day samples to evaluate TCE due to the controversial concerns regarding potential birth defects associated with short-term exposure.

Because several consumer products such as some hobby glue, gun cleaners, Christmas ornaments, and spot cleaners can contain VOCs, there is a need to determine if VOCs found in a building originated from the subsurface or from indoor sources. Several diagnostic methods may be employed, such as methods described in these ESTCP projects:

Precautions are sometimes required when designing remediation systems to avoid causing or exacerbating a VI situation. In theory technologies such as air sparging, enhanced anaerobic bioremediation, chemical oxidation, or in situ thermal methods can generate additional volatiles in the vadose zone, or change how those volatiles move near or into structures and cause VI problems. To control VI risk from remediation, the following measures can be employed:

Despite the theoretical potential, as of 2016 we are not aware of many well-documented cases where remediation has caused or worsened actual VI problems at a site, suggesting that remediation-caused VI problems may be rare or that existing industry precautions have generally been successful in managing the risks.

VI is a field with a rapid evolution of conceptual and mechanistic understandings of the pathways and tools for assessment and mitigation.

Some of the most important knowledge about VI has been obtained from detailed studies of buildings. Two of the most extensive data sets from individual residential buildings, in broadly similar climates but of varying construction dates are: