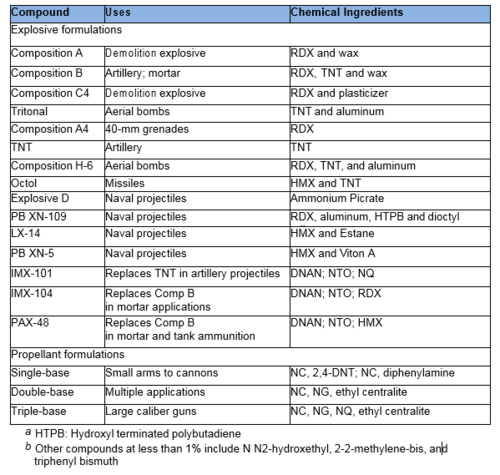 Common military explosives are mixtures consisting of one or more explosive compounds including trinitrotoluene (TNT), 1,3,5-hexahydro-1,3,5-trinitrotriazine or Research Development Explosive (RDX), octrahydro-1,3,5,7- tetranitro-1,3,5,7-tetrazocine or High Melting Explosive (HMX), and 2,4,6- trinitro-phenylmethylnitramine (tetryl) and ammonium picrate. However, the US military is replacing many of these materials with insensitive munitions (IM) to reduce risks of accidental detonation. IM materials will burn, rather than explode, when subjected to fast or slow heating, bullets, shrapnel, shaped charges, or the detonation of another nearby munition. Important components of IM include 2,4-dinitroanisole (DNAN), nitroguanidine (NQ), 3-nitro-1,2,4-triazol-5-one (NTO) and other traditional munitions components (RDX, HMX). We highlight common military explosives, propellants, and IM formulations in Table 1.

The structure (e.g., Fig. 1), as well as physical and chemical properties of explosive materials control their fate and transport in the environment (Table 2). 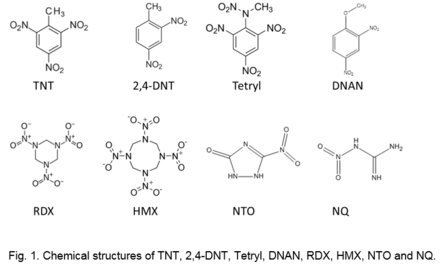 With the exception of NG, the major EM are solids at ambient temperatures (Table 2). Table 2 provides the molecular mass, aqueous solubility, Log octanol-water partition coefficient (Log Kow), and vapor pressure of common explosive materials. Although NG is a liquid, it is commonly used as a component of double- and triple-base propellants, with the solid polymeric NC. Aqueous solubility of EM varies dramatically between the different materials and can have an important influence on their mobility in the environment. Organic compounds with a high Kow are more likely to sorb to organic carbon in soil or bioaccumulate; however, EM tend to be high in nitrogen, and by definition, are strong oxidizing agents. EM materials tend to form crystals. The vapor pressure of these materials is relatively low, so volatilization is not an important removal mechanism for most EM.

Exposure of humans to EM compounds can result in significant health issues. High oral or dermal exposures to TNT can cause liver and blood damage, anorexia, and anemia. High oral exposures to RDX can cause neurological affects such as convulsions. Some EM can bioaccumulate in crop plants (e.g. RDX), leading to potential exposure by eating or direct contact[18][19]. TNT and 2,4-DNT are classified as possible human carcinogens by the U.S. EPA[6]. In contrast, HMX is not currently classified as a human carcinogen, but has been shown to have adverse impacts on the liver and nervous system in some laboratory animals[20]. The US military is replacing many of traditional explosives with IMs to reduce risks of accidental detonation. Since IM materials including DNAN, NTO, and NQ have not been in common use, considerable effort has been focused on understanding the toxicity of these materials (see Munitions Constituents - IM Toxicology).

There are currently no federal maximum contaminant levels (MCLs) for TNT, RDX, and HMX. Life-time health advisory levels in drinking water vary from 400 µg/L for HMX, to 2 µg/L for RDX, and 2 µg/L for TNT[21].

Fate and Transport in the Environment

Much of the early work on environmental issues related to EM focused on concentrated sources including manufacturing facilities and locations where off-specification, unserviceable, and obsolete munitions were destroyed[22] . More recently, attention has focused on potential contamination from military training when partial detonations deposit EM particles on range soils (see Munitions Constituents - Deposition). Once deposited on a range, the EM dissolves over time, a process thought to be the rate-limiting step for aqueous transport of these compounds to soil and groundwater. The mass of EM dissolved is a function of the aqueous solubility of the compound, the mass of explosive residues deposited on the soil, the size of individual residues, and the three-dimensional (3D) structure of formulations that have multiple constituents (see Munitions Constituents - Dissolution). During transport through the subsurface, EM migration is influenced by sorption to the solid phase (see Munitions Constituents - Sorption), as well as chemical transformation and biodegradation.

However, the Department of Defense (DoD) has invested considerable resources to understand how these factors can be influenced, or how they operate in natural settings, to limit transport of EM in surface or groundwater. In addition, a number of remediation strategies have been developed that address EM, and applied both in situ and ex situ at DoD facilities.