"Passive sampling" refers to a group of methods used to quantify the availability of organic contaminants to move between different media and/or to react in environmental systems such as indoor air, lake waters, or contaminated sediment beds. To do this, the passive sampling material is deployed in the environmental system and allowed to absorb chemicals of interest via diffusive transfers from the surroundings. Upon recovery of the passive sampler, the accumulated contaminants are measured, and the concentrations in the sampler are interpreted to infer the chemical concentrations in specific surrounding media like porewater in a sediment bed. Such data are then useful inputs for site assessments such as those seeking to quantify fluxes from contaminated sediment beds to overlying waters or to evaluate the risk of significant uptake into benthic infauna and the larger food web. 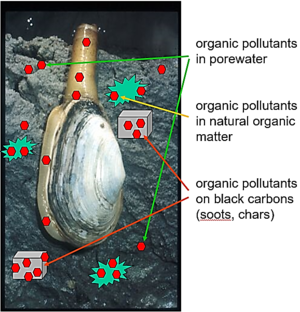 Figure 1. A representation of a clam living in a sediment bed that contains a chemical contaminant (depicted as red hexagons). The contaminant is partly dissolved in the sediment porewater between the solid grains, and partly associated with solid phases, like natural organic matter and "black carbons" such as soots from diesel engines and chars emitted during forest fires. All of these liquid and solid materials can exchange their contaminant loads with one another, with the distributions dependent on the chemical's relative affinity for each material. When an organism like a clam lives in such a system, the chemical contaminant is accumulated into the organism, until the concentration of the chemical in the organism is also equilibrated with the other solids and liquid(s) present.

Environmental media such as sediments typically contain many different materials or phases, including liquid solutions (e.g. water, nonaqueous phase liquids like spilled oils) and diverse solids (e.g., quartz, aluminosilicate clays, and combustion-derived soots). Further, the chemical concentration in the porewater medium includes both molecules that are "truly dissolved" in the water and others that are associated with colloids in the porewater[4][5][6]. As a result, contaminant chemicals distribute among these diverse media (Figure 1) according to their affinity for each and the amount of each phase in the system[7][8][9][10][11]. As such, the chemical concentration in any one medium (e.g., truly dissolved in porewater) in a multi-material system like sediment is very hard to know from measures of the total sediment concentration, which unfortunately is the information typically found by analyzing for chemicals in sediment samples.

While there is a great deal of information on the values of Klipid-water for many chemicals[12], it is often very inaccurate to estimate truly dissolved porewater concentrations from total sediment concentrations using assumptions about the affinity of those chemicals for the solids in the system[7]. Further, it is difficult to isolate porewater without colloids and/or measure the very low truly dissolved concentrations of hydrophobic contaminants of concern like polycyclic aromatic hydrocarbons (PAHs), polychlorinated biphenyls (PCBs), nonionic pesticides like dichlorodiphenyltrichloroethane (DDT), and polychlorinated dibenzo-p-dioxins (PCDDs)/ dibenzofurans (PCDFs)[13].

One approach to address this problem for contaminated sediments is to insert into the sediment films of organic polymers like low density polyethylene (LDPE), polydimethylsiloxane (PDMS), or polyoxymethylene (POM) that can absorb such hydrophobic chemicals from their surroundings[14][15][16][17][18][19][2]. In this approach, the polymer is inserted in the sediment bed where it absorbs some of the contaminant load via the contaminant's diffusion into the polymer from the surroundings. When the polymer achieves sorptive equilibration with the sediments, the chemical concentration in the polymer, Cpolymer (μg/kg polymer), can be used to find the corresponding concentration in the porewater, Cporewater (μg/L), using a polymer-water partition coefficient, Kpolymer-water ((μg/kg polymer)/(μg/L water)), that has previously been found in laboratory testing[20][21], as shown in Equation 2.

Such “passive uptake” by the polymer also reflects the availability of the chemicals for transport to adjacent systems (e.g., overlying surface waters) and for uptake into organisms (e.g., bioaccumulation). Thus, one can use the porewater concentrations to estimate the biotic accumulation of the chemicals, too. For example, for the concentration in the animal equilibrated with the sediment, Canimal (μg/kg animal), would be found by combining Equations 1 and 2 to get Equation 3. 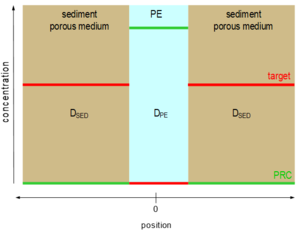 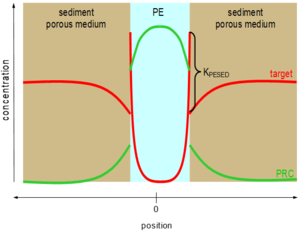 Figure 2b. After the PE has been deployed for a time, the PRC is depleted from the PE (green lines), especially near the surfaces contacting the sediment, and its concentration is building up outside the PE and diffusing away into the sediment. Meanwhile, the target chemical leaves the sediment and begins to diffuse into the PE (red lines). The "jumps" in concentration at the PE-sediment boundary reflect the equilibrium partitioning coefficient,
KPE-sed = CPE / Csediment.

Perhaps unsurprisingly, pollutants with low water solubility like PAHs, PCBs, etc. do not diffuse quickly through sediment beds. As a result, their accumulation in polymeric materials in sediments can take a long time to achieve equilibration[22][23][24]. This problem was recognized previously for passive samplers called semipermeable membrane devices (SPMDs, e.g. polyethylene bags filled with triolein[25]) that were deployed in surface waters. As a result, representative chemicals called performance reference compounds (PRCs) were uniformly impregnated into the samplers before their deployment in the environment, and the PRCs' diffusive losses out of the SPMD could then be used to quantify the fractional approach toward equilibration of the sampler with its environmental surroundings[26][25]. A similar approach can be used for polymers inserted in sediment beds[22][1]. Commonly, isotopically labeled forms of the compounds of interest such as deuterated or 13C-labelled PAHs or PCBs are homogeneously impregnated into the polymers before their deployments. Upon insertion of the polymer into the sediment bed (or overlying waters or even air), the initially evenly distributed PRCs begin to diffuse out of the sampling polymer and into the surroundings (Figure 2).

Assuming the contaminants of interest undergo the same mass transfer restrictions limiting their rates of uptake into the polymer (e.g., diffusion through the sedimentary porous medium) that are also limiting transfers of the PRCs out of the polymer[22][1], then fractional losses of the PRCs during a particular deployment can be used to adjust the accumulated contaminant loads to what they would have been at equilibrium with their surroundings with Equation 4.

Since investigators are commonly interested in many chemicals at the same time, it is impractical to have a PRC for each contaminant of interest. Instead, a representative set of PRCs is used to characterize the rates of polymer-environment exchange as a function of the PRCs' properties (e.g., diffusivities, partition coefficients), the characteristics of the sediments (e.g., porosity), and the nature of the polymer used (e.g., film thickness, affinity for the chemicals)[22][23]. The resulting mass transfer model fit can then be used to estimate the fractional approaches to equilibrium for many other contaminants, whose diffusive and partitioning properties are also known. And these fractions can be used to adjust the target chemical concentrations that have accumulated from the sediment into the same polymeric sampler to find the equilibrated results[1]. Finally, these equilibrated concentrations can be used in Eq. 2 to estimate truly dissolved contaminant concentrations in the sediment's porewater. 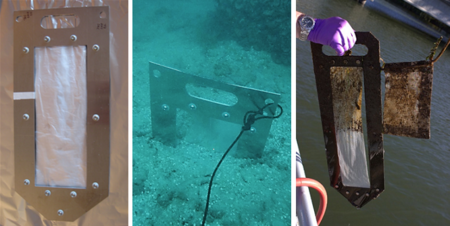 Figure 3. Passive sampler system made of polyethylene film loaded into an aluminum sheet metal frame, before (left), during (middle), and after (right) deployment in sediment.

Deployment of the assembled passive samplers can be accomplished via poles from a boat[1], by divers[2], or by attaching the samplers to a sampling platform lowered off a vessel[27]. Typically, the method used depends on the water depth. Small buoys on short lines, sometimes with associated water-sampling polymeric materials in mesh bags (see right panel of Figure 3), are attached to the samplers to facilitate the sampler recoveries. After recovery, the samplers are wiped to remove any adhering sediment, biofilm, or precipitates and returned to the laboratory for PRC and target contaminant analyses. The resulting measurements of the accumulated target chemical concentrations can be adjusted using the observed PRC losses and publicly available software programs[28][29].

Subsequently, since the passive sampling reveals the concentrations of contaminants in a sediment bed's porewater and the overlying bottom water[15], the data can be used to estimate bed-to-water column diffusive fluxes of contaminants[30][27] and bioirrigation-affected fluxes[31]. The data are also useful for assessing the tendency of the contaminants to accumulate in benthic organisms[32][33][34], and by extension into food webs that include such benthic species[35]. Furthermore, recent efforts have found that passive sampling observations can be used to infer in situ transformations of substances like nitro aromatic compounds[36] and DDT[37].

A PRC Correction Calculator for LDPE deployed in sediments